The F-06B is Fujitsu's first rotating slide-screen mobile phone to be water-resistant (IPX5/IPX7/IPX8(1)). The phone is equipped with a 13.2 megapixel camera capable of recording Full Hi-Vision(2) movies, as well as a large, easy-to-use 3.5" touchscreen display that allows users to comfortably navigate menus and view captured photos. In addition, the F-06B features Wi-Fi tethering capability that enables it to be used as a wireless LAN access point for easily linking PCs and portable gaming devices(3) to the Internet, as well as a full-featured electronic multimedia dictionary(4) containing full versions of Kojien and other dictionaries.

The F-06B is a water-resistant mobile phone that boasts unprecedented high functionality and performance which will satisfy the needs of PRIME series users.

With the release of the F-09A in June 2009, Fujitsu introduced the rotating (yoko-motion) slide screen as the latest technology in the evolution of mobile phones. As Fujitsu's first water-resistant rotating slide-screen mobile phone, the F-06B combines three different user modes—a closed touch screen mode that allows users to quickly access information, a sliding mode that gives users convenient access to the keypad that they are used to, and a dynamic horizontal-screen mode that allows users to enjoy Internet and TV contents.

To make the most of its 13.2 megapixel camera, the new mobile phone is equipped with the Milbeaut® Mobile(5) image-processing engine and capable of recording Full Hi-Vision video footage (1,920×1,080 resolution) that is equivalent to videos taken by a digital video camera. In addition, the F-06B comes with a variety of useful new functions that rival those of digital cameras, including a "Best Shot Select" feature, a smooth slow-motion video recording function, and a "Wide-angle Flash" feature. The "Best Shot Select" feature captures seven continuous photographs with a single press of the shutter and automatically selects the best out of these seven captured images.

The mobile phone incorporates additional features such as a large 3.5" touchscreen display with an improved response time, Wi-Fi tethering capability that enables the phone to be used as a wireless LAN access point for easily linking PCs and portable gaming devices to the Internet, as well as a full-featured electronic multimedia dictionary that contains dictionary data from 28 different reference books (22 dictionaries + 6 sectoral search volumes), including full versions of Kojien, English-Japanese Dictionary for the General Reader, and Shin Kangorin.

The new mobile phone's design features a distinctive arc frame that, when combined with the phone's water-resistance and slim form factor, makes for a stylish end result. The F-06B is available in three colors: white, black, and cyan. 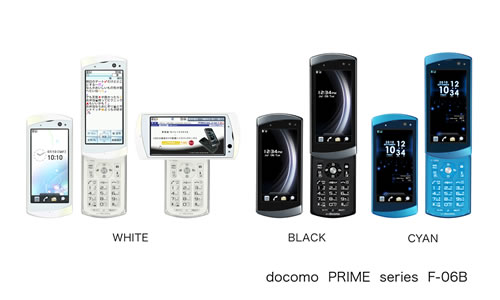 1. IPX5/7/8 water resistance As Fujitsu's first rotating slide-screen mobile phone to be water resistant, the F-06B was designed to be functional in a wide range of situations where users do not have to care about rain or water. Because it is IPX8 compliant, the camera can be used underwater at a depth of 1.5 m.

4. Wi-Fi compatibility By turning the F-06B into a Wi-Fi access point (base station), users can connect a wireless LAN-compatible PC or portable gaming device to the Internet at their convenience. In addition, because the mobile phone is AOSS(8) compatible, it can be easily connected to external devices.

When connecting to a wireless LAN access point in client-mode, the F-06B can access the Internet using its full-featured browser at speeds of up to 54Mbps(9). Furthermore, its compatibility with AOSS and Wi-Fi Protected Setup (WPS) allow for easy configuration for access point connections.

5. Full-featured electronic multimedia dictionary The F-06B is equipped with a full-featured electronic multimedia dictionary that contains dictionary data from 28 different reference books (22 dictionaries + 6 sectoral search volumes), including full versions of Kojien, English-Japanese Dictionary for the General Reader, and Shin Kangorin. Due to of its multimedia capabilities, users can double-check the results of their word searches through videos and sound files. When using the foreign language conversation dictionary, users can play foreign language sound bites of example sentences they have searched for in Japanese, making it useful for international travel.

7. FM transmitter capability The F-06B can broadcast sound from its music player or one-segment TV tuner as an FM signal. Using the FM radio of an automobile or home stereo system, users can easily enjoy music at any time.

Milbeaut is a trademark of Fujitsu Semiconductor Limited.

Yoko-motion is a registered trademark of Fujitsu Limited.

All other product or company names mentioned herein are trademarks or registered trademarks of their respective firms. Information provided in this press release is accurate at time of publication and is subject to change without advance notice.