Solves optimization problem to reveal the behavior of 3 key molecules, contributes to research in science and technology

Fujitsu Limited and Chuo University of Japan today announced that a team of researchers(1) from Chuo University, Kyoto University, Tokyo Institute of Technology and Japan's Institute of Physical and Chemical Research (known as Riken) employed the T2K Open Supercomputer - which was delivered by Fujitsu to Kyoto University's Academic Center for Computing and Media Studies - to successfully compute with high precision, as a world first, an optimization problem to reveal the molecular behavior of methyl radical (CH3), ammonia (NH3) and oxygen (O2).

This accomplishment paves the way for computing the behavior of complicated molecules that cannot be seen by the human eye, by enabling researchers to gain a greater understanding of the behavior of water molecules, the properties of proteins, photosynthesis, and the mechanisms of superconductivity would also contribute to the development of new medicines and new materials. Furthermore, a wide range of potential applications is expected to emerge from this research, not only in the fields of physics and chemistry, but also in engineering and social sciences areas such as natural sciences, control design and signal/image processing.

Supercomputers are computers capable of quickly performing large-scale and advanced computations that are difficult to solve using average computers. Supercomputers have received a great deal of attention as a tool for solving important issues facing human society, such as environmental problems and challenges in the medical and manufacturing fields.

One reason why supercomputers have become so important is attributable to their role in computer simulations. Computer simulations, which use computers to compute and reproduce various phenomena, have been called the "third pillar of science" alongside theory and experimentation. Computer simulation is becoming an indispensable tool in all fields of research and development, from basic research to manufacturing.

The T2K Open Supercomputer (Figure 1), which was delivered by Fujitsu to Kyoto University's Academic Center for Computing and Media Studies, is a computer equipped for handling large-scale advanced scientific computation.

For example, the Schrödinger equation enables scientists to determine how carbon dioxide (CO2) is transformed into oxygen (O2), what happens when two forms of matter are mixed, and how to formulate effective medicines. Through the computation of the Schrödinger equation, it is possible to explain the mechanisms of such chemical phenomena without the need for experimentation.

In reality, however, if the Schrödinger equation is precisely applied, it can become extremely complex and can turn into an enormous equation that holds little hope of being computable. Thus far, the equation has only been employed in cases where it can be relatively easily computed.

In 2001, Maho Nakata of Kyoto University (presently a researcher at Riken) and Professor Hiroshi Nakatsuji (presently of the Quantum Chemistry Research Institute) proposed a computational method for solving the optimization problem of the direct variational calculation of reduced density matrices, instead of solving the massive Schrödinger equation.

This computational method involved the use of an optimization problem computational technique called Semidefinite Programming (SDP)(2). However, the results were limited to small atoms and molecules, and faster computation of SDP became the key to performing computations for larger molecules with complicated behavior in a short amount of time.

The research team from Chuo University, led by Professor Katsuki Fujisawa, developed the SDPARA software package, based on an advanced optimization algorithm, as a high-speed SDP computational method. By running large-scale tests of SDPARA on the T2K Open Supercomputer, the team was successfully able for the first time ever to precisely compute the behavior of methyl radical (CH3), ammonia (NH3) and oxygen (O2).

During the actual computation, the matrix for the largest molecule employed in this study - ammonia (NH3) - reached a size of 19,640 × 19,640, and therefore had too many elements to be processed in a practical amount of time using average computer systems (Figure 3). By employing a supercomputer, the team was successfully able to solve the matrix in the computing time shown in Figure 4. For this computation, the T2K Open Supercomputer employed 128 nodes for its computations, utilizing a total memory volume of 4 terabytes and 2048 cores. 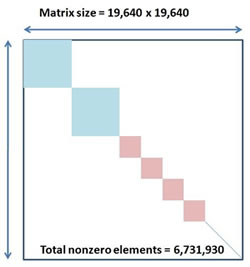 As a world first, the research team succeeded for the first time ever in precisely computing the optimization problem (using SDP) to reveal the behavior of the molecules methyl radical (CH3), ammonia (NH3) and oxygen (O2). Because the methodology can compute the behavior of complicated molecules without the need for experimentation, it has the potential to be applied in a variety of fields, such as the development of new drugs and new materials, as well as applications in physics, chemistry and engineering.

In addition, this research has opened up the possibility of using supercomputers for computations in the field of superconductivity - a feat which thus far no computer has been able to accomplish yet. Furthermore, the research is expected to contribute to the development of innovations that are presently impossible in the area of energy storage (power storage), and in the medical and electronics fields.

The research team will strive to contribute to the advancement of science and technology through research that leverages high-speed supercomputers.

The large-scale supercomputer computations for this research have been supported by the Collaborative Research Program for Large-Scale Computation of ACCMS and IIMC, Kyoto University. In addition, partial software development has been made possible through the Chuo University Grant for Special Research.

Chuo University was founded as Igirisu Horitsu Gakko (the English Law School) in 1885 and have six faculties and their graduate schools, as well as three professional graduate schools (Chuo Graduate School of International Accounting, Chuo Law School, Strategic Management Course). The Faculty of Science and Engineering was founded in 1949 and have nine departments (Mathematics, Physics, Civil Engineering, Precision Mechanics, Electrical Electronic and Communication Engineering, Applied Chemistry, Industrial and Systems Engineering, Information and Systems Engineering, Biological Science). Number of Students of the Faculty of Science and Engineering: 4,154 (as of May 1, 2010)Please see: http://www2.chuo-u.ac.jp/global/index.html.