Fujitsu Laboratories Ltd. today announced the development of an amplifier based on gallium-nitride (GaN)(1)high electron mobility transistor (HEMT)(2) technology, which features an output of 12.9W - more than twice the output of previous amplifiers and presently featuring the world's highest amplification output - when operating in the wide band range of the C-band, X-band, and Ku-band(3) radio frequency spectrums between 6GHz-18GHz. By employing this amplifier, it will be possible to operate systems such as aviation radar - which conventionally utilize separate communications equipment for different frequency ranges - with a single amplifier, thereby enabling the development of smaller, lighter radar equipment and wireless communications systems that are capable of covering wide areas.

Details of this technology will be presented at the IEEE MTT International Microwave Symposium (IMS 2010) being held in Anaheim, U.S. from May 23-28.

Given these characteristics, GaN HEMTs - a kind of GaN-based transistor - are anticipated to offer high-output high-efficiency operation.

Aircraft radar typically switches between the C-band, which is relatively unaffected by rain, and the X- and Ku-bands which offer high-precision detection of solid objects. An amplifier featuring the ability to cover - on its own - the entire range of the C- to Ku-bands would allow for smaller systems that consume less power. This has led to keen interest in multifunctional radars, which integrate communications systems and multiple radars and into a single device. 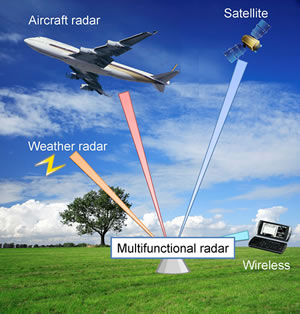 To achieve the output needed to cover large spectrums such as the C- to Ku-bands, in the past multiple transistors have been connected in parallel to create an amplification circuit. However, as the circuit is physically longer, line loss increases, thus making it difficult to extend coverage up to 18GHz.

The newly-developed GaN HEMT amplifier was proven to produce 12.9W of power over the wide 6GHz-18GHz spectrum with 18% efficiency(4). This amplification output is more than double (2x) the output of existing ultra-broadband, high-frequency amplifiers, and represents the world's highest level of performance (Figure 3).

This new technology will make it possible for a single amplifier to operate at multiple frequencies, paving the way for further integration of systems, such as broadband communications systems and radar systems that utilize various frequencies, thus allowing for more compact and lighter equipment. The technology can also be used in measuring instruments in order to measure the performance of amplifiers used in broadband communications and radar systems.

Fujitsu Laboratories plans to apply this technology to a wide range of applications that require high output across wide bandwidths, including wireless communications and radar.