Japan's Pharmaceutical Common Achievement Tests Organization and Fujitsu today announced the joint development of a computer-based testing (CBT(1)) system as part of the Pharmaceutical Common Achievement Test (PhCAT) for pharmacy students nationwide. Between December 2009 and March 2010, computer-based testing was administered for the first time at 67 departments from 66 pharmacy universities across Japan, and approximately 9,300 students who successfully passed the exam will participate in on-site practical training starting May 17, 2010.

The PhCAT is administered to aspiring pharmacists during their senior (fourth) year. The test is used to judge whether students are meeting uniform national standards to enter a five-month clerkship program in clinics and pharmacies in Japan during their fifth year. By deploying Fujitsu's independently-developed, networked testing system for the PhCAT to facilitate test question creation, selection and assessment, the Pharmaceutical Common Achievement Tests Organization was able to quickly and accurately administer the examination across Japan.

In an effort to nurture a new generation of pharmacists that is well-versed in a variety of areas and adaptable in the clinic, the pharmaceutical educational system in Japan was restructured in 2004, resulting in the creation of a six-year course for pharmacy students starting in the 2006 academic year. Under the new system, students are required to participate in five months of on-site practical training in clinics and pharmacies during their fifth year. In preparation for this training, the Central Council for Education recommended the students take a standard achievement examination. In addition, the Health, Labour and Welfare Ministry of Japan proposed that a standard achievement examination be used as a suitable requirement for students who do not possess pharmacist licenses to determine whether their knowledge, skills and attitudes are on par with uniform national standards. The Pharmaceutical Common Achievement Tests Organization was established during a meeting of presidents and department chairs from pharmacy universities across Japan, and the organization began operating in October 2006. It served as a center for examinations leading up to the administration of the PhCAT.

About the Pharmaceutical Common Achievement Test

The Pharmaceutical Common Achievement Test, which is composed of a CBT system to test students' basic knowledge and an Objective Structured Clinical Examination (OSCE), a practical exam containing questions on topics such as filling prescriptions and handling patients, is administered at each university. While a common achievement test had already been implemented at medical and dental schools, the Pharmaceutical Common Achievement Tests Organization, together with Fujitsu, pursued the development of an independent CBT system for pharmacy schools.

The CBT system used in the PhCAT connects 74 departments from 73 pharmacy universities(2) across Japan through a network. With the assistance of the Pharmaceutical Society of Japan, professors from pharmacy universities in Japan can use the system to create and select test questions over the network. In terms of administering the exam, the system can handle everything from exam distribution to student test taking and score assessment. During examination time, 310 randomly selected questions are sent from the Pharmaceutical Common Achievement Tests Organization's central server at the Tokyo University of Science to relay servers at each university, which then forward the questions to computers at testing locations on the day of the exam. This is the first time a university CBT exam has been administered over such a network.

In addition, in order to prevent fraudulent behavior, the system does not display examination questions using a web browser but instead employs a proprietary application developed by Fujitsu. If a test taker attempts to illicitly copy the contents of the examination screen using the application, the exam will automatically terminate, thereby protecting the security of the exam and preventing test questions from being leaked. 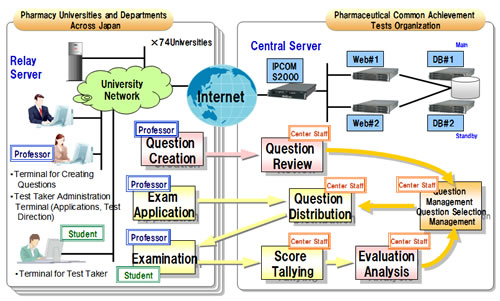 In order to make the percentage of correctly answered test questions consistent, the Pharmaceutical Common Achievement Tests Organization and Fujitsu held three trial runs starting in 2007. Using the CBT system's question assessment and analysis features, they were able to repeatedly analyze the test answers to determine the difficulty of each question, thereby ensuring that questions were properly selected for the examination. By engineering the CBT system to have a question distribution system that employs item response theory(3), every student on the national level will be randomly assigned 310 questions of the same difficulty, making it possible to evaluate students based on a fixed standard.

As for the results of the CBT, on average 82.8% of the questions were answered correctly, resulting in a passing rate of 99.3% with a total of 9,338 students passing. These students have been fairly evaluated to possess the qualifications necessary to participate in on-site practical training split into three sessions starting May 17, 2010.

The Pharmaceutical Common Achievement Tests Organization strives to strengthen the accountability of universities towards society by ensuring the qualifications of students participating in on-site practical training. In the future, the organization will aim to further improve the quality of its CBT questions and administration methods, to continue to administer examinations, to train and turn out skilled pharmacists as the next generation of medical care providers, and to contribute to the improvement of medicine and the enhancement of public welfare.

In addition to supporting the implementation and operation of PhCAT's CBT system, Fujitsu plans to support the education and training of students in six-year pharmacy programs by developing a set of training progress tools to be used during on-site practical training in managing the content, evaluation and daily tracking of the training itself.