Fujitsu today announced that it has collaborated with Amada Co., Ltd. to explore the application of cloud computing to enhance Amada's maintenance services for its metalworking machinery installed at customer locations. As the first step in this process, Amada has employed Fujitsu's networking services to upgrade the networking environments of its IT service cars(1), transforming them into mobile offices. These IT service cars, used by roughly 300 of Amada's service engineers across Japan, are equipped with IT terminals and Amada's proprietary package of repair tools. This upgrade has made it possible for engineers to access information, such as repair manuals, while on-site.

Furthermore, Fujitsu and Amada have conducted collaborative trials towards establishing a remote monitoring system for on-site metalworking machinery, which considered factors such as ICT system configuration, data collection cycle, and response speed of the machinery, as well as costs. The trials have paved the way for future implementation of a remote cloud-based system.

Amada's metalworking machinery is widely employed across the world to produce various kinds of metal products and components from sheet metal. In the event that on-site machinery requires maintenance due to component wear or other trouble, production at the customer's factory is forced to stop, which can lead to significant loss stemming from delivery delays and decreased productivity.

Starting in 2008, as a part of an effort to reduce its customers' operational losses, Amada developed a total operational support system through which the company has provided its service engineers with IT service cars, improved its customers' maintenance support information, and upgraded its parts center. In order to further enhance its maintenance services, Amada has explored employing Fujitsu's cloud services to expand two aspects of its total operational support system. 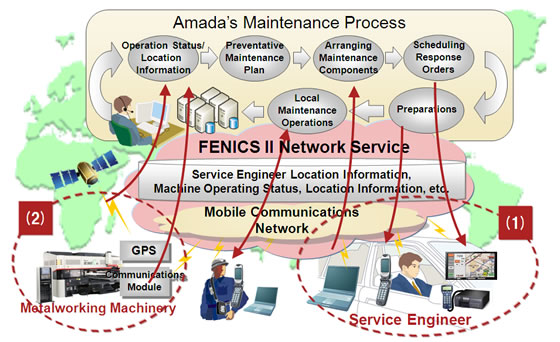 (2) Remote Monitoring System for On-site Metalworking MachinerySince July 2009, Fujitsu and Amada have jointly explored ways of remotely collecting and accessing, via mobile networks, information on the location and operational status of Amada's machinery. Using such mobile technologies as Fujitsu's FENICS II networking service, mobile phones, and wireless networks as a foundation, this was realized by embedding a communications module in Amada's control computers linked to its metalworking machinery. The two companies began joint experimental trials in November 2009, paving the way for the development of a remote monitoring system through the progress involving the configuration of applied ICT systems, data collection cycle of the machinery, response speeds, as well as costs.

Starting in April 2010, the two companies will begin monitoring the effectiveness of such a system by permanently installing a database of collected operations data and a remote machine control environment at Amada's facilities.

The FENICS II networking service and results from the joint remote machine monitoring trial will be on exhibit at Fujitsu Forum 2010, which will be held May 13-14 at the Tokyo International Forum.

Beginning in the second half of fiscal 2010, Fujitsu plans to provide as a service, the M2M Communications(2) knowledge it obtained during the joint trial, by incorporating it into the company's FENICS II networking service and cloud services. It is anticipated that there will be an increased demand for M2M Communications, which connects various technologies throughout the world including machines, automobiles, automatic vending machines, and sensors. Through ICT services, Fujitsu aims to further contribute to its customers' businesses.

"By combining Amada's total operational support system with the remote metalworking machinery monitoring jointly tested with Fujitsu, we have been able to quickly discover the causes of component wear and the factors that lead to operational stoppages of machinery, thus enabling us to prevent problems before they occur and deliver high-quality maintenance services to our customers. In addition, by expanding the application of this mechanism globally, we will be able to deliver high-quality and highly reliable services to our worldwide customers without any time lag."