Fujitsu today announced that the Sentinel Asia(1) STEP-2 system, which it built under the auspices of the Japan Aerospace Exploration Agency (JAXA), became fully operational on March 31, 2010.

The system supports disaster-prevention activities using Earth observation satellites operated by government agencies in Asia, including JAXA, to acquire satellite imagery. The images are then distributed via the Internet and Kizuna communications satellite to countries throughout Asia, including those that do not own satellites.

With an increasing number of typhoons, floods, earthquakes, tsunamis, and other large-scale natural disasters occurring in Asia in recent years, the new system will help countries to quickly respond to disasters. During a trial run held from October 2009 through March 2010, the system was used to track the volcanic eruption of Mt. Mayon in the Philippines on December 25, 2009, where it proved capable of providing useful information.

To support the transmission of information to countries lacking an adequate Internet infrastructure, Fujitsu has integrated its high-speed file transfer solution, BI.DAN-GUN, to the Internet and satellite delivery functions of the system, increasing the speed by as much as 20-fold(2).

Sentinel Asia STEP-2 is an advancement of its predecessor, STEP-1, and has been newly developed to deliver information to disaster-response organizations from countries participating in the Sentinel Asia project, using a website which collects and displays imagery from Earth observation satellites. In emergency situations such as natural disasters, the STEP-2 system will provide satellite imagery of the affected region when requested by any participating country. Fujitsu's high-speed file transfer service, BI.DAN-GUN, has been integrated into the system's Internet and satellite data transmission functions, increasing the effectiveness of transfers between distant locations or over poor communications lines. It also supports reliable transmissions of satellite imagery to areas lacking an adequate Internet infrastructure. As high-efficiency transfers and image distribution are now possible, the system also holds the promise of helping other countries stay abreast of natural disaster conditions in the future.

The system started trial operations in October 2009, and went into regular operations as of April 2010.

5. Periodic transmission of outside data information on forest fires and rainfall distribution The system also collects data from Japan's Meteorological Agency, the University of Tokyo, and research institutes in Australia, Thailand, and Singapore, providing additional information on forest fires, rainfall distribution, and weather. This information is transmitted at regular intervals to the regional servers and agencies in other countries.

During 2009, a total of 58 organizations in 23 countries and regions, along with nine international organizations, participated in the Sentinel Asia project. It has also entered into an alliance with the International Charter Space and Major Disasters(4). As Sentinel Asia raises its international profile, it is expected to be an important vehicle for Japan's diplomatic exchanges in the field of science and technology for the benefit of Asia.

Fujitsu looks forward to building on its experience with system development for aerospace organizations such as JAXA, and with creating, developing, and operating social-infrastructure systems for organizations such as the Japan Meteorological Agency to contribute to the benefit of global welfare through the application of ICT. 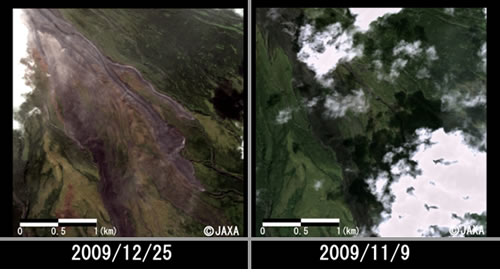