Fujitsu announced that five models of the PRIMEQUEST 1000 series, the latest in its lineup of mission-critical x86 servers, will be available worldwide starting today.

PRIMEQUEST 1000 series servers are equipped with the latest 8-core Intel® Xeon® processor 7500 series, maintaining the same standards of reliability and availability as previous series(1), while at the same time improving the series' price/performance ratio by roughly 6x. In addition, by decreasing the physical size of the server—a reduction of rack space by 1/3 and weight by 1/5—Fujitsu has succeeded in cutting the series' maximum power consumption by approximately 1/3. The PRIMEQUEST 1000 series is being offered as a "Fujitsu Super Green" product, distinguishing it as a leading environmentally friendly product based on the Fujitsu Group's green assessment guidelines. 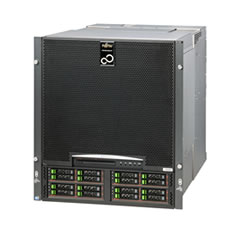 Equipped with an Intel processor and Linux® and Microsoft® Windows Server® operating systems, PRIMEQUEST, which combines Fujitsu's proprietary technologies for high reliability and availability, is the perfect open-system server for use in upgrading mission-critical business systems, large-scale database systems, or as an ERP solution platform. Furthermore, because of its compatibility with leading virtualization software, PRIMEQUEST exhibits strength as a trusted enterprise cloud computing platform, as well as in server consolidation and integration, which are effective in reducing the total cost of ownership (TCO) of ICT systems.

The PRIMEQUEST 1000 series will be exhibited at Fujitsu Forum 2010, to be held on May 13-14 at the Tokyo International Forum in Tokyo.

In recent years, an increasing number of companies have employed open systems for their mission-critical business system needs, with the aim of shedding their dependence on vendors, optimizing their investments, and managing the latest technologies.

In response to this demand, Fujitsu began offering the PRIMEQUEST series in 2005 as an open-system, mission-critical server that combines industry-standard open architecture with technologies for high reliability and availability that Fujitsu has cultivated from developing mainframe servers.

The PRIMEQUEST 1000 series consists of five server models in the following three categories.

*Some models available in Japan only.

The PRIMEQUEST 1000 series is being offered as a "Fujitsu Super Green" product, distinguishing it as a leading environmentally friendly product based on the Fujitsu Group's green assessment guidelines.

SAP and all SAP logos are trademarks or registered trademarks of SAP AG in Germany and in several other countries.