- Top performance in Japan based on LINPACK benchmark -

The new system will be used in a variety of areas of atomic energy research, including nuclear fusion simulations. It will also play an important role in ensuring the safe use of atomic energy. 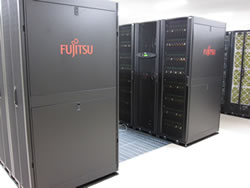 The new system is a hybrid system consisting of three computational server systems, each intended for different purposes: (1) Large-scale Parallel Computation Unit, (2) Application Development Unit for the Next-Generation Supercomputer, and (3) SMP Server (shared memory server). The Large-scale Parallel Computation Unit, which forms the core of the new system, is able to deliver a high-performance parallel computing environment through its use of Fujitsu's latest blade server, PRIMERGY BX900, in a configuration of 2,134 nodes (4,268 CPUs, 17,072 cores) connected using the latest InfiniBand QDR high-speed interconnect technology.

Making up the Large-scale Parallel Computation Unit at the heart of the system, the PRIMERGY BX900 servers were benchmarked using LINPACK and achieved a result that would place the new system first among the Japanese entries posted on the most recent TOP500 list (November 2009 edition) of supercomputers, and 19th in the world.

This measurement is the result of a complete system architecture that combines the raw performance of PRIMERGY BX900, the latest blade servers, with Fujitsu's Parallelnavi HPC middleware and system integration technologies such as program tuning.

In particular, by mounting two InfiniBand QDR cards in each blade server one-way data transfers as fast as 8 GBps can be achieved. Furthermore, the science and technical math libraries of Parallelnavi equipped with world-class, high performance features stemming from the technology of Fujitsu Laboratories also contributed greatly to the LINPACK score.

Comment from Toshio Hirayama, Director of the Center for Computational Science and e-Systems of the JAEA

"Supercomputers are indispensible for the kind of scientific computations required in nuclear energy research and development. For that reason, I'm confident that the new supercomputer system will make it possible to bring calculations that had been impractically large within reach. By leveraging this new system, we intend to develop codes for the Next-Generation Supercomputer that will be deployed in 2012."

PRIMERGY BX900 is Fujitsu's most advanced blade server for global businesses, with industry-leading mounting density of 18 blades per chassis and a total throughput of 6.4 Tbps, far superior to competing models.

In addition to its use in supercomputers, the PRIMERGY BX900 blade server is well-suited for a wide range of applications, including mission-critical enterprise computing systems, server consolidation, and the building of cloud environments.

All other company or product names mentioned herein are trademarks or registered trademarks of their respective owners. Information provided in this press release is accurate at time of publication and is subject to change without advance notice. Intel, the Intel logo, Xeon, and Core are trademarks of Intel Corporation in the US and elsewhere.