Fujitsu Laboratories Ltd. today announced the development of a new frequency-synthesizer(1) designed specifically for tuners(2) for terrestrial digital television broadcast reception, which features an innovative circuit design that enables the reduction of circuit size to one-third (1/3) that of conventional circuits, and eliminates the need for external components. The new frequency-synthesizer will allow for more compact and power-efficient terrestrial digital TV broadcast reception tuners, paving the way for future development of compact dual-tuners.

Details of this technology were presented at the IEEE International Solid-State Circuits Conference 2010 (ISSCC 2010) being held in San Francisco from February 7-11. (Presentation number: 13.3)

Tuners used in televisions and mobile phones in Japan receive radio signals from broadcast towers and extract audio-visual data from those signals. Due to the fact that each channel transmitted by a broadcast tower occupies a different frequency, the tuners must use a frequency-synthesizer to generate a clock signal equivalent to the frequency of the channel the viewer wishes to watch. (Figure 1)

In Japan, the scheduled transition from analog TV broadcasts to digital TV (scheduled for July 2011) has heightened the demand for a frequency-synthesizer specifically designed for use in terrestrial digital broadcasting.

In Japan, the popularity of "1seg" broadcasts viewed via mobile phones has led to needs for terrestrial digital TV broadcast tuners that are compact and which can operate on low power. In addition, there is also growing anticipation for mobile phones equipped with dual-tuners, which will enable simultaneous recording of multiple TV programs and quicker channel scanning. Synthesizers, a major component in these tuners, have typically used delta-sigma modulation in a fractional multiples method. However, this conventional method has required an external filter circuit to suppress the noise that can impair the tuner's reception sensitivity — the need for such external filters is an obstacle to miniaturizing the module. Furthermore, with the conventional delta-sigma modulation/fractional multiples method (Figure 2), in order to create a dual-tuner, two (2) external filters are required, thus further increasing the size of the module.

Key elements of the new frequency-synthesizer are as follows:

Terrestrial digital TV broadcasts in Japan consist of 14 segments occupying 6 MHz of bandwidth: 12 segments for TV, one segment for "1seg" mobile phone broadcasts, and one segment left empty. Thus, the terrestrial digital TV broadcast channels are spaced by 6/14ths, or 3/7ths of 1 MHz; therefore the ability to generate a clock signal at 3/7th MHz intervals allows all of the channels to be received.

The new "circulating registers" modulator from Fujitsu Laboratories features an innovative circuit design in which seven (7) registers are lined up in parallel, resulting in accurate reception of 3/7th MHz frequency intervals that are used in terrestrial digital TV broadcasts in Japan, which makes possible an efficient 1/7th MHz multiplier needed for terrestrial digital TV broadcasts in Japan. These factors enable noise suppression, thus eliminating the need for an external filter circuit and resulting in a more compact frequency-synthesizer. (Figure 4) 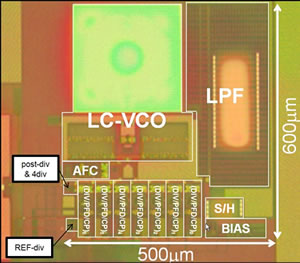