Fujitsu Limited and Fujitsu Laboratories Ltd. announced today the development of the world's first gallium-nitride(1)HEMT(2)-based transceiver amplifier chipset for broadband wireless transmission equipment operating in the millimeter bandwidth, the range of 70 to 100 GHz, for which widespread usage is expected to grow. The new transceiver amplifier chipset features a GaN HEMT-based high-output transmitter amplifier and high-sensitivity receiver amplifier. The transmitter amplifier achieves the world's highest level of performance with output of 350 mW, while the receiver amplifier features the world's highest level of signal gain at 310 times (310x) operating in the W-band(3) with a low noise figure(4) of 3.8 decibels (dB). Compared to gallium-arsenide (GaAs)-based technology, the new GaN HEMT-based amplifier chipset for the millimeter band is anticipated to offer output that is increased by approximately four-fold (4x), and a noise figure decreased by 40%, while transmission ranges are expected to be extended by roughly three-fold (3x). Used as an alternative to fiber-optic cabling, Fujitsu's new GaN HEMT-based millimeter-band transceiver amplifier will help bridge the digital divide(5) for wireless communications, by making communications equipment for trunk lines and ultra-high-speed fixed wireless access higher in quality and more compact, ultimately making wireless broadband more practical.

Details of this technology were presented at the European Microwave Integrated Circuits Conference (EuMIC), being held from September 28 to 29 in Rome. Part of this research was conducted as part of the Research and Development Project for Expansion of Radio Spectrum Resources sponsored by Japan's Ministry of Internal Affairs and Communications.

In order to accommodate the demands for greater bandwidth on the Internet, mobile phone networks, and other networks, fiber-optic cabling is being laid throughout Japan to create a high-capacity trunk-line system. This is problematic in heavily built-up areas, or areas with difficult topography, which has sparked interest in high-bandwidth wireless that is capable of data transmission capacities and speeds of 10 Gbps - on par with fiber-optic cabling - as a way to bridge the digital divide.

The millimeter-wave band from 70 to 100 GHz would be an effective band to use for wireless communications running faster than 10 Gbps, as it is readily available and is appropriate for long-distances transmissions. Fujitsu and Fujitsu Laboratories have successfully tested millimeter-band transmitters and receivers at speeds of 10 Gbps using impulse radio(6) . In order for this to be practical and widely used, transmission distances would need to be extended from several kilometers to several tens of kilometers. One way to achieve that would be through higher-output amplifiers. However, higher outputs bring with them increased power-leakage from the transmitter to the receiver, which can overload the inputs of circuits using existing indium-phosphide (InP)- and GaAs-based technologies, resulting in breakdowns (Figure 2). As a result, there has been a desire to develop GaN-based receiver amplifiers, as they can tolerate higher inputs and have excellent reception sensitivity.

In order to enable a transceiver amplifier that satisfies the aforementioned requirements for W-band signals, the following issues need to be addressed:

1. Compared to conventional GaAs HEMT devices, material used in GaN HEMT devices have wide band-gap characteristics that enable breakdown-voltages that are ten times greater (10x), allowing GaN HEMT devices to tolerate higher voltages. However, because the parasitic capacitance of transistors worsens with high-frequency signals of 70 GHz or higher, the signal amplification rate to magnify weak incoming signals - to enable them to be identified - is insufficient, as the incoming signals become buried in noise.

2. At frequencies above 70 GHz, the signal wavelength is roughly the same length as the chip size, which produces signal interference that is more prominent, between signal paths and circuits. This makes it difficult to create an integrated circuit featuring good signal amplification and low noise, due to the fact that oscillation of the circuit itself can result in malfunctions caused by unnecessary power-coupling between the signal paths.

Fujitsu has addressed the aforementioned issues through the following technologies:

In 2006, Fujitsu and Fujitsu Laboratories developed a GaN HEMT structure with gates of only 0.12 µm in length, allowing for both high breakdown-voltage and good high-frequency performance. By tuning this gate structure and adjusting the thickness of the protective layer, parasitic capacitance was reduced, and the increased signal gain further improved noise characteristics (Figure 3).

Compared to existing devices, as the output of GaN HEMTs is higher, signal interference - caused by unnecessary signal emissions from signal circuitry - between signal paths and circuits is more prominent in GaN HEMTs. With the newly-developed device, by laying contact conductors around the signal circuitry, while employing a 3-D electromagnetic field analysis to optimize the placement of via-holes that penetrate the top and bottom of the chip relative to signal paths and circuits, and in addition by developing a design technology that shields against unnecessary signal radiation , and applying all of these for the first time ever in GaN HEMT circuitry, signal interference was successfully suppressed. These technologies realize a circuit that features high output and high signal-gain while being able to operate stably, free from malfunctions caused by circuit oscillations (Figure 4). 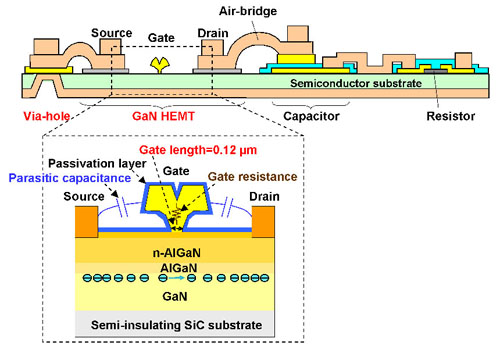 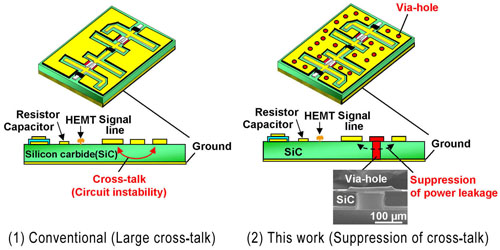 The aforementioned technologies have been used to develop a transceiver amplifier chipset for use in millimeter-wave wireless equipment (Figure 1). The newly-developed receiver-amplifier operates in the W-band with a signal gain rate of 25 dB (signal gain is 310x) and a noise figure of 3.8 dB, both figures being the world's best-ever reported for a GaN-based integrated circuit (Figure 5). The amplifier unit's reception performance is on par with those using GaAs-based technology, but because it obviates the need for a protective circuit, the performance of the transceiver as a whole can be expected to improve (Figure 6). In addition, the transmitting amplifier has world-class performance, featuring transmission output of 350 mW.

Compared to GaAs-based technology, the new technology produces output that is roughly four times greater (4x) and reduces the noise figure by 40%. Compared to transceivers based on conventional GaAs technology, transmission ranges can be expected to be three times as great (3x). This will pave the way for wireless transmission equipment that is more compact and which features improved transmission quality. 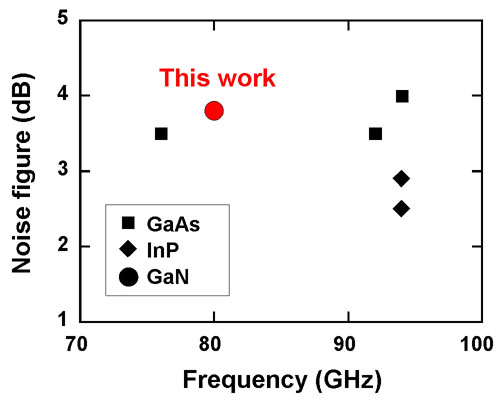 Fujitsu and Fujitsu Laboratories plan to continue improving the performance of and expanding the frequency band for GaN circuits featuring high breakdown-voltages, to enable wireless equipment that can be used as an alternative to fiber-optic networks, thus helping to bridge the digital divide through widespread use in trunk lines and ultra-fast fixed wireless access equipment.