Fujitsu today announced that Packet One Networks (Malaysia) Sdn Bhd (P1), Malaysia's leading WiMAX telecom carrier, has successfully deployed Fujitsu's FLASHWAVE® 7500 high-speed optical wavelength division multiplexer as the transmission backbone for its WiMAX network in the Malaysian capital of Kuala Lumpur, as well as the adjacent state of Selangor. This marks the first time the FLASHWAVE 7500 platform has been deployed in Malaysia.

P1 is Malaysia's first and leading WiMAX operator, which began its commercial rollout of its P1 W1MAX broadband Internet service in August 2008. Commercial launch began in selected areas in and around Malaysia's capital, Kuala Lumpur, and to date the P1 W1MAX service has expanded into major parts of the Klang Valley, Johor, Penang, and selected cities and towns in Northern Malaysia, including Kedah, Pahang, and Perak. This places P1 as Malaysia's widest range WiMAX network operator.

Several factors were behind the decision of P1 to choose FLASHWAVE 7500 platform. One is that the FLASHWAVE 7500 system includes a Reconfigurable Optical Add/Drop Multiplexer (ROADM)(1), with technologies designed to deliver efficient high-speed optical transmission while reducing the amount of electrical power consumed. Also factoring into this decision was Fujitsu's established track record in Malaysia as a leading provider of optical transmission systems and other equipments, as well as the support provided by Fujitsu Telecommunications Asia Sdn Bhd, a wholly owned subsidiary of Fujitsu.

Fujitsu's high-speed optical wavelength division multiplexing equipment is already widely used as a core part of both fixed-line and wireless networks of major telecom carriers as well as cable television companies in North America and Japan, where broadband networks are widely deployed. In Asia, the current win follows the August 2008 deployment of the FLASHWAVE 7500 platform in Vietnam. Fujitsu plans to provide the FLASHWAVE 7500 ROADM to support upcoming deployments of next-generation networks in both the APAC and EMEA regions.

Moreover, to respond to growing demands as broadband and network deployments continue to spread, Fujitsu intends to build on its track record and know-how to contribute to the creation of next-generation networks optimized to meet the needs of each country or region worldwide.

Features of the FLASHWAVE 7500 Platform

With Wavelength Selective Switch(2) technology, which makes efficient use of optical signals, the FLASHWAVE 7500 system allows the setting and changing of optical signal paths by remote operation. ROADM technology provides for cross-connecting, or splitting an unmodified optical signal among multiple paths. This allows for vastly lower power consumption and other operating costs compared to conventional equipment, which requires conversion into electrical signals.

The FLASHWAVE 7500 platform supports a wide range of interfaces, including SONET/SDH(3), Ethernet, and other data interfaces. 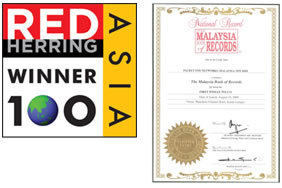 Packet One Networks (M) Sdn Bhd (P1) is Malaysia's first and leading WiMAX telecommunications company with the country's widest WiMAX network. P1 W1MAX represents the first large-scale commercial deployment of mobile WiMAX in Southeast Asia, and the first large-scale deployment of an 802.16e 2.3GHz WiMAX network outside Korea. P1's goal is to bridge the digital divide by making access to the internet universal, ubiquitous and affordable for every Malaysian. P1 hopes to play a major part in realizing the nation's goal - to have 50% broadband penetration by 2010. P1 is the winner of the Red Herring Asia's Most Innovative Private Technology Company in 2008 and is listed in the Malaysia Book of Records as Malaysia's first WiMAX telco (August 2008). For more information on P1, visit www.p1.com.my.

FLASHWAVE® is a trademark of Fujitsu Network Communications Inc. (USA). FUJITSU (and design)® and THE POSSIBILITIES ARE INFINITE™ are trademarks of Fujitsu Limited. All rights reserved. All other company or product names mentioned herein are trademarks or registered trademarks of their respective owners. Information provided in this press release is accurate at time of publication and is subject to change without advance notice.