Fujitsu Laboratories Ltd. today announced the development of a new structure for gallium-nitride high electron-mobility transistors (GaN)(1)(HEMT)(2) that can minimize power loss in power supplies, thus enabling reduced power consumption of electronic equipment such as IT hardware and home electronics. The new technology blocks the flow of current from power supplies in stand-by mode and produces high-density current when turned on (on-state current)(3), and has the potential to cut power consumption of electronic equipment by one-third. If applied to data centers, Fujitsu's new GaN HEMT would be able to reduce total power consumption by 12%, thereby resulting in the effect of removing 330,000 tons of CO2 from Japan as a whole.

Details of this technology were presented at the Device Research Conference 2009 (DRC 2009) being held at Penn State University in University Park, Pennsylvania, U.S. from June 22 to 24.

With environmental protection being an increasingly important priority in technology development, and as part of Fujitsu's Green Policy Innovation(4) initiative to help customers reduce their environmental burden footprint, Fujitsu has made power-saving technologies a focus of its R&D efforts. Due to the fact that the amount of electricity consumed by IT hardware, home electronics, and car electronics all have a direct impact on CO2 emissions, reducing power consumption is a high priority throughout the industry. For power supplies used in electronic hardware, power lost as heat can account for 30% or more of the total power consumed by the device. Furthermore, waste heat creates the need for additional cooling equipment, thus resulting in a ripple effect of increased power consumption.

Power supplies (Figure 1) take the alternating-current (AC) power from a wall outlet and convert it to the stabilized direct-current (DC) power that electronics require. As the AC power from public utilities can be erratic in quality, voltage is first stabilized and then reduced, and finally the voltage is converted to DC. Circuitry that reduces the voltage uses transistors to quickly switch between a state that passes current, and one that blocks it, using the resulting high-frequency AC power. While power supplies have typically used silicon transistors, silicon transistors suffer from some power loss, known as "on-state loss"(5) when passing current, as well as considerable power loss when switching between on and off states, known as "switching loss"(6), such that transistor-related losses account for more than one-third (1/3) of all power loss that occurs in a power supply. This issue has sparked efforts to develop new transistors and circuits with low power loss. 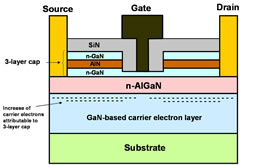 A desirable characteristic for power supplies used in products such as PCs, home appliances, and automobiles is a complete current-interruption in stand-by mode, in which no voltage is being applied to the gate electrodes. Conventional GaN HEMTs have required a negative gate voltage to be applied when in stand-by mode. In 2008, Fujitsu Laboratories developed a new 3-layer cap structure for GaN HEMTs - by sandwiching an aluminum-nitride (AlN) layer between n-type GaN layers - which can suppress the current when in stand-by (Figure 2). The new GaN HEMT structure was originally developed for wireless transmission amplifiers; however, because the voltage that was applied at the gate electrode in order to switch between on and off states ("turn-on voltage") was in the range of 0.5 V, it could not be used for power supplies, which need to apply +2 to +4 V in order to apply hundreds of volts at the drain. In addition, power supplies effectively need to have an on-state current density of at least 600 milli-amps/millimeter (600 mA/mm). 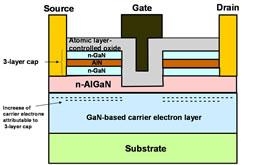 In addition to its GaN HEMT with the three-layer (3-layer) cap structure, Fujitsu made the two following advances in GaN HEMT technology (Figure 3). 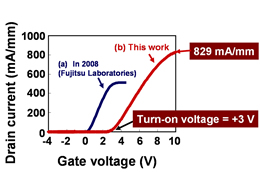 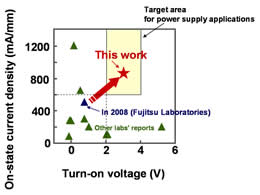 Figure 5. Maximum current density and turn-on voltage (threshold voltage) benchmarks for Fujitsu's new GaN HEMT (transistors with a breakdown-voltage of 100 V or higher in which current can be interrupted during stand-by without applying a negative gate voltage)

With the new transistor in power supplies, power loss can be reduced to one-third (1/3) that of power supplies based on conventional silicon transistors. Extrapolated to all of the data centers in Japan - and taking into account the knock-on benefits of energy savings enabled through reduced air-conditioning electricity required for cooling - this development would reduce data-center power consumption in Japan by 12%, which could be expected to reduce Japan's total CO2 emissions by 330,000 tons(8).

Additionally, the high-frequency performance of Fujitsu's new transistors would enable more compact power supplies. High-speed transistor operation would allow for more compact coils and transformers, which have been particularly difficult to miniaturize in conventional power supplies with low-frequency operation: the size of AC adapters for notebook PCs, for example, could be reduced to one-tenth current sizes. Smaller power supplies would contribute to reducing pace requirements for data centers, as well.

Fujitsu is progressing with practical implementations of GaN transistors featuring high breakdown-voltages, with the aim of producing power supplies based on them by approximately 2011.

Company and organization names referenced herein are trademarks or registered trademarks of their respective owners. Information provided in this press release is accurate at time of issue and is subject to change without advance notice.