Fujitsu Laboratories Limited today announced the development of the world's first 101-watt (101-W) X-band(1) high-output amplifier achieving the world's highest efficiency(2) of 53% using gallium nitride (GaN)(3)high electron-mobility transistors (HEMTs)(4). Compared to X-band amplifiers with same-class output power using gallium arsenide (GaAs) HEMTs, this new amplifier can save much power dissipation and can be expected to achieve twice the range. Furthermore, by employing the new amplifier in the C band(5), Fujitsu Laboratories achieved an output of 343 W, an advance over the 320 W output reported by Fujitsu Laboratories in 2008 which was the world's highest at that time. Compared to conventional amplifiers employing GaAs HEMTs, it is anticipated that this new GaN HEMT-based amplifier can achieve a range that is 2.6 times as great in the C band. This new amplifier technology holds the promise to serve as an alternative to traveling-wave tube amplifiers(6) in high-output applications, and may enable smaller, more energy-efficient, higher performance, and longer-lasting transmission systems in radars, satellite communications, and advanced mobile-phone base stations.

Details of this technology were presented at the 2009 IEEE MTT-S International Microwave Symposium (IMS2009) being held in Boston from June 7 to June 12.

In 2008, Fujitsu Laboratories developed a C-band amplifier using GaN HEMTs, which has higher output electrical density and excellent dissipation characteristics compared to GaAs HEMTs. The amplifier featured had output in excess of 300 W, making it at that time the world's first high-output and high-efficiency C-band amplifier.

The C band is used mostly for fixed-point wireless and wireless access. The higher-resolution X-band radar is used for weather radar and aircraft control, but because the X band is prone to signal attenuation by rainfall, it needs even higher output and efficiency from its amplifier.

Previously-reported high-output X-band amplifiers based on GaN HEMTs suffered from poor efficiency, and presented the following problems that would need to be solved for practical implementation:

To resolve the aforementioned issues, Fujitsu Laboratories developed a high-efficiency, high-output GaN HEMT amplifier for use in the X and C bands, that is comprised of two (2) transistor chips. This design enables the inherent high-output performance of GaN HEMTs to come through even at high frequencies, and operates with high efficiency. Key benefits of the new amplifier and technology are as follows:

Additionally, by applying these technologies, Fujitsu Laboratories was able to improve the amplification performance for C-band amplifiers as well. 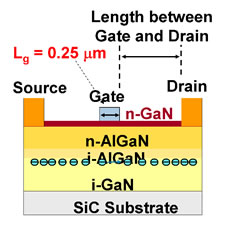 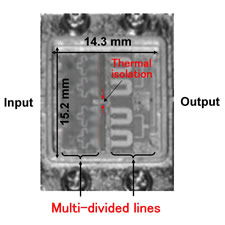 The aforementioned technologies were used to develop two types of GaN HEMT amplifiers, for the X band and C band.

In the X band, this resulted in the world's highest efficiency at 53% and high output of 101 W, as well as good characteristics (Figure 3). Efficiency is especially important for reducing power consumption by the transmitter. Compared to previously-reported results, with equivalent output in the 10 GHz band, efficiency was approximately 20% higher, thus significantly contributing to power savings. Moreover, the 101 W output that was generated was roughly four times greater than output generated with GaAs HEMT amplifiers (according to comparisons made by Fujitsu), allowing for reach to be extended by potentially up to two times.

Additionally, in the C band, this technology maintains levels of efficiency announced by Fujitsu in 2008, while also increasing output which reaches 343 W. This significantly improves upon the figure of 320 W, which was the world's highest when Fujitsu reported it last year. At 343 W, this amplifier outperforms GaAs-based amplifiers by a factor of seven (according to comparisons made by Fujitsu Laboratories), allowing for reach to be extended by potentially a factor of 2.6 times.

The results raise the prospect of using these amplifiers as alternatives to traveling-wave tube amplifiers in high-output applications, which would enable the realization of compact, lightweight, low-power, durable transmission systems in radars, satellite transmitters, and advanced mobile-phone base stations.

Fujitsu plans to apply these technologies to a wide range of applications for which the combination of high- output and high-efficiency performance is demanded, including as alternatives to traveling- wave tube amplifiers used in weather and air-traffic control radars, satellite communications, and next-generation mobile-phone base stations for wireless communications equipment, 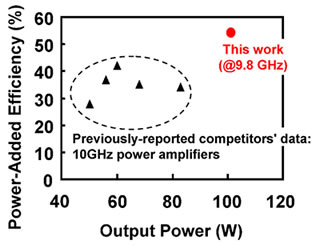