Fujitsu Laboratories Ltd. announced today the development of the world's first imaging technology for use in palm vein biometric authentication that can operate while the palm is in motion. The new technology requires approximately only one millisecond to capture the image, and performs with the same level of accuracy in authentication as previous iterations of this technology, resulting in an extremely user-friendly palm vein authentication system in which a person's palm needs only to be passed over a sensor for authentication. 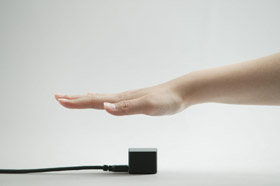 In recent years, to prevent information leaks or identity fraud in companies and banks, biometric authentication technologies have become prevalent as a means to verify an individual's identity.

Together with Fujitsu Limited, Fujitsu Laboratories has developed a biometric authentication technology based on the patterns of veins in the palm. This approach has a number of advantages, including enabling high-accuracy authentication and measuring a feature that is inside the body, making it difficult to falsify. This technology has been developed by Fujitsu into a non-contact palm vein authentication system called PalmSecure (Figure 1), which is used for example by banks to authenticate customers, for computer log-in, and in room-entry/exit management systems. PalmSecure holds additional promise for a wide range of various applications, for a multitude of security-focused customers.

With previous iterations of the palm vein authentication technology, the individual's palm needed to be held over the authentication sensor in order to capture an image of the palm veins. However, in order to make the technology readily applicable to an even broader range of applications - in addition to working when a palm is suspended over the sensor - it should also operate properly when users pass their palms over the sensor. To achieve this goal, imaging technology that could capture the pattern of palm veins even when a user's palm is just passed over the sensor would be effective.

To resolve the aforementioned issue, Fujitsu Laboratories developed a prototype authentication device that employs a high-speed shutter to capture images of the palm veins without blurring even when the palm is in motion, in contrast to the previous version which captured images when the palm was suspended above the sensor (Figure 1). The new image-capturing method is comprised of the key technologies described below. 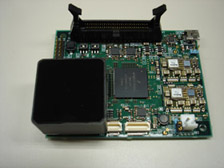 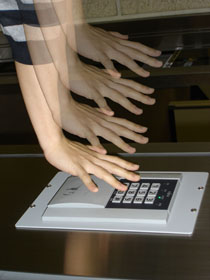 Fujitsu Laboratories has confirmed that these new imaging techniques can capture images of palm vein patterns even while the hand is in motion - at approximately the same average speed as a person walks (1 meter per second) - with image quality equivalent to levels achieved with the conventional system, which required the palm to be held over the palm vein authentication sensor. This technology retains the superior features of the previous palm vein authentication technology, including the following: it is difficult to falsify identity because it measures a biometric feature that is inside the body, it is widely applicable because it is not prone to effects from external factors, and its non-contact hygienic factor enables greater user acceptance. In addition, the new technology can perform authentication when a palm is just passed over a sensor, resulting in a palm vein authentication system that can be used in a significantly broader range of applications.

With this new feature, it is possible to authenticate an individual's identity using palm vein authentication with the same ease as (Figure 3), for example, gliding non-contact smartcards over a train-station turnstile gate, a widely-deployed technology for commuters in Japan. This new technology will make it easier to deploy easy-to-use and highly-precise palm vein authentication systems in a wide range of venues that require reliable and convenient security systems, including corporations, government offices, and hospitals.

With the goal of commercializing this technology, Fujitsu will continue with technological advancements to resolve issues to enable practical use, such as reducing the size and cost of the image-capture module.