Fujitsu Limited announced that it has completed a new supercomputer system for the Japan Aerospace Exploration Agency (JAXA). The new system began operations on April 1, 2009.

Features of the new supercomputer system 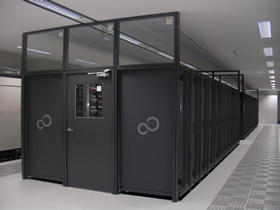 The FX1 high-end technical computing server constitutes the core of the new system. This is a large-scale system, with 3,392 nodes, reaching a total theoretical peak performance of 135 teraflops and featuring 100 terabytes of memory and 11 petabytes of storage installed.

This is augmented by a number of subsystems, including vector calculation units and scalar symmetric multiprocessing units for numerical simulations that use vast amounts of memory. These allow the system to be used for a variety of purposes while offering an efficient, highly optimized computing environment.

LINPACK benchmark performance measurements on the 3,008-node FX1 primary system are as follows:

How this performance was achieved

The benchmark test results can be attributed to a combination of factors: the high performance of the hardware in the FX1 technical computing server, the Parallelnavi middleware for high-performance computing (HPC) that can extract the maximum performance from that hardware, and the technical abilities involved in building the system.

The test was designed to challenge the system's maximum processing power up to the limit permitted by available memory. No runtime limit was imposed. The 3,008-node (3,008 CPUs, 12,032 cores) large cluster managed to complete the benchmark for over 60 hours under a severely high workload of more than 90%. Such results confirmed the system's high reliability.

"We are excited to be using a new supercomputer with the world's best computing efficiency. In addition to pursuing aviation research, as we have done in the past, we look forward to using the new supercomputer system in the fields of rocket engine analysis and rocket plume acoustic analysis as well as for spacecraft concept design. Our goal is to make significant contributions in the practical application and development of numerical simulation technologies for space development, science, and exploration."

The FX1 employs a new computing architecture to get the most from its multi-core CPU capability. With a chipset designed for high-memory bandwidth suited for Fujitsu's SPARC64™ Ⅶ high-performance quad-core CPU and the high-performance compiler, the system is able to reach an extraordinarily high level of computing efficiency that is difficult to achieve with conventional multi-core systems.

In addition, through high-functionality interconnects(4) that enable various types of calculation to be performed on data in the transmission pathway, a significant leap in the scalability of parallel applications is achieved. Moreover, the rich suite of development platform tools and operational functions delivered by Parallelnavi, the parallel-processing software that has a long track record in the field of technical computing, makes it easy to work in a high-performance parallel computing environment.

In addition to a development environment that includes a compiler needed for science and technology computation and a math library, Parallelnavi is a suite of HPC middleware with an execution environment and file system that is compatible with all of Fujitsu's HPC systems. Because the math library dictates LINPACK's processing performance to a large extent, it played a large part in enabling the supercomputer system to achieve the world's highest computing efficiency measured in the latest test.