The testing took place in the Special Ubiquitous Zone, an area of the northern Japanese city of Sapporo in Hokkaido, designated by the Ministry of Internal Affairs and Communications in 2008 as a wireless communications testing area, and used prototypes of the wireless LTE base stations developed jointly by NTT DOCOMO, Fujitsu and Fujitsu Laboratories which, with the use of MIMO technology, resulted in high-speed wireless transmissions in the range of 120 Mbps (using 10 MHz bandwidth) in Sapporo's urban environment.

LTE, sometimes referred to as the 3.9G wireless standard, is a standard for wireless communications that enables broadband communications for mobile phones. It is an international standard created by the standard-setting organization 3GPP(3) and is intended to produce dramatic improvements in wireless performance, including faster, higher-capacity data communications, reduced connection lag times, and more efficient bandwidth frequency utilization.

Fujitsu and Fujitsu Laboratories were selected by NTT DOCOMO in 2006 to be the developer and manufacturer of their wireless LTE base stations. Since then, they have worked together with NTT DOCOMO to develop these technologies using 4x4 MIMO, which increases speed and capacity in both transmitting base stations and receiving mobile stations, and the three companies have performed successful tests of a prototype three-sector LTE base station that has a transmission capacity of 300 Mbps per sector on the downlink (20 MHz band). 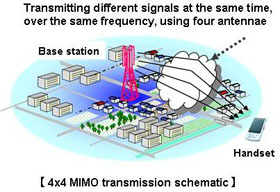 The field testing involved LTE transmissions using NTT DOCOMO test stations in Sapporo's urban environment, assessing the throughput characteristics of 4x4 pre-coding MIMO(4) on the downlink and confirming that a maximum of 120 Mbps (using 10 MHz bandwidth) could be attained over a measured course. This would be equivalent to 240 Mbps throughput using the 20 MHz maximum bandwidth that LTE allows. These tests revealed that the adaptive switching used in MIMO multiplexing was effective in achieving stable throughput in outdoor carrier environments.

Through transmission speeds measuring approximately 35 times that of 3.5G (7.2Mbps) and 2.5 times that of fixed optical fiber lines (100Mbps), wireless LTE transmission of large volumes of data used in high-definition videos, as well as in business and everyday life, is now possible.

The results will contribute to Fujitsu's ongoing development of wireless base stations, as well as core network systems, handset technology, and the total LTE commercial network.

Partial results from these tests will be presented jointly by Fujitsu, Fujitsu Laboratories, and NTT DOCOMO at the general meeting of the Institute of Electronics, Information, and Communications Engineers (IEICE), on March 17 at Ehime University in Japan.