Networking technologies have become more diverse, and a variety of network services are now widely used, including fixed-line and mobile phone services, internet services, and enterprise VPN services. Advanced network services, such as "Next-Generation Network" (NGN)(1) services that enable the distribution of high-quality video, are expected to proliferate as well. Because existing network services have each been constructed around a particular system, it has been thus far difficult to combine these different services, to for example enable a phone's voicemail to be checked over the Internet.

One approach to resolving this problem that has received considerable attention are SDPs, in which software is made available as elements ("service elements(2)") that implement common network functions - such as collection and distribution of data - across multiple network services, and these service elements run on a common platform that allows them to be combined into applications. SDPs are made available through network service providers(3) and carriers(4), and using SDPs can enable application service providers(5) to reduce developmental volume of and enable faster and more-efficient development of applications that link various services.

Fujitsu Laboratories has been developing SDP-related technologies, and has developed data-storage technologies in the form of service elements, which can gather and distribute real-time data obtained on-site from people or objects through RFID tags or sensors.

In a scenario where services are being provided by applications using a SDP, when the variety of applications as well as the number of terminals and sensors increase, the heavy load creates the risk of a processing bottleneck by the service elements, possibly impairing usability of services provided to application users. To eliminate this problem, the server load must be distributed and allocated, by allocating the service elements to multiple servers, and through equal distribution of the messages exchanged between applications and terminals or sensors, to multiple servers. 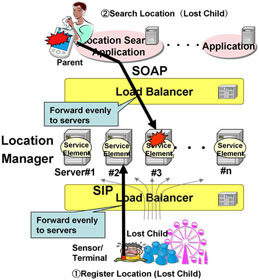 In order to address the aforementioned issues, Fujitsu Laboratories developed a new messaging technology for SDP messages that features the following characteristics (Figure 2):

When a service element is accessed by a terminal or application, this mechanism collects data that identifies each application or terminal (the identifier) and the correspondence information that specifies the server to which that service element has been allocated for load distribution. 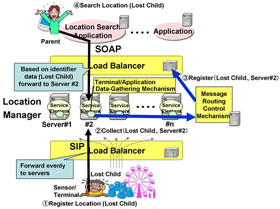 To enable a new terminal or application to access the service element on the appropriate server, the correspondence between the identifier - collected by the terminal/application data-gathering mechanism - and the server is set in advance, on the equipment that handles load distribution of the varying communication protocols, so that the access route to the service is controlled. Fujitsu Laboratories created and tested a prototype of a service application to optimize the distribution of staff within a given building, in response to locational data gathered from visitors moving about in the building. The locational data from multiple visitors was gathered over SIP and stored on multiple servers, and messages from an application over SOAP - designed to reference that data - were sorted to the appropriate server executing the service element, from among all the servers, thus verifying proper and efficient server load distribution.

By using a SDP comprised of service elements and the newly-developed messaging technology, application service providers will be able to provide a variety of new services, without having to be concerned of a rise in the number of application users or number of terminals (Figure 3).

In addition to continuing with performance testing for this technology, Fujitsu Laboratories plans to give consideration to specific products for which this technology could be applied to for SDPs for network service providers and carriers.