Details of this technology were presented at the IEEE International Solid-State Circuits Conference 2009 (ISSCC 2009), held in San Francisco from February 8 to February 12 (Presentation 10.5). 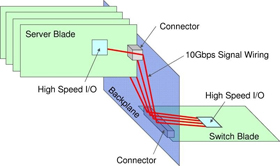 Figure 1: Backplane and high-speed transceiver circuit for a blade server

Blade servers - in which the basic components of a server, such as the CPU and memory, are mounted on a bare circuit board in server blades and then installed into a server system comprised of multiple server blades - have become a popular way to design IT systems to reduce space requirements and enable efficiencies in operations. In order for blade servers to achieve superior performance, technologies to enable the backplane - which is a communications circuit board connecting multiple server blades - to achieve high-speed transmissions of 10Gbps, and technologies to accelerate those transmissions through multiple channels are being developed (Figure 1). In recent years, there is growing interest in energy-efficient and higher-density IT equipment to achieve "Green IT"; in addition, for high-speed transceiver circuits in the circuit boards ("switch blades") that execute transmissions between server blades, there is as well demand for higher density and power savings along with higher performance.

As a result of these new technologies, there is sufficient space for the transceiver circuit to have multiple channels, thus enabling the implementation of 4 channels and thereby quadrupling the performance. Because backplane transmissions of 10Gbps can be achieved on multiple channels, effective transmission speeds in excess of 10Gbps are enabled. 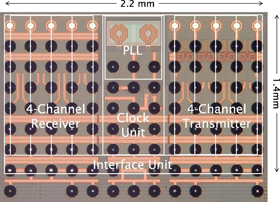 By taking advantage of the integration of multiple channels, and by embedding the new transceiver circuit into LSIs to enable high-performance switches, it is anticipated that the new transceiver circuit utilizing the aforementioned technology will be employed for blade server systems requiring high-density packaging and high-speed transmissions. The technology can also be applied to forthcoming 40Gbps Ethernet, for server systems that feature higher performance, higher density packaging, and lower power requirements.

Fujitsu Laboratories of America, Inc. is a wholly owned subsidiary of Fujitsu Laboratories Ltd. (Japan), focusing on research on advanced VLSI CAD, Internet, and interconnect technologies. Conducting research in an open environment, it contributes to the global research community and the working IT industry. It is headquartered in Sunnyvale, CA.
For more information, please see: www.fla.fujitsu.com