Fujitsu Laboratories Limited today announced the development of the world’s first radio frequency (RF) transceiver chip(1) produced with 90 nm CMOS process technology(2) that operates at the 77 gigahertz (77GHz) frequency, designed for use in automotive radars. The new transceiver chip includes several novel miniaturization technologies from Fujitsu Laboratories, including circuit design that employs inductor elements(3), and a newly developed signal-distribution circuit that utilizes magnetic field coupling. With a die size of 1.2 mm x 2.4 mm, this is the smallest example of a CMOS-based transceiver for the millimeter-band RF that has been reported thus far at an academic conference.

Automotive radar has previously been implemented using multiple chips, including the RF transceiver chip and baseband chip(4). The novel miniaturization technologies from Fujitsu Laboratories featured in the new transceiver chip make it possible to integrate all necessary functions onto a single chip, which is expected to significantly lower the cost of automotive radar and promote its widespread use.

Details of this technology were presented at the IEEE International Solid-State Circuits Conference 2009 (ISSCC 2009), held in San Francisco from February 8 to February 12 (Presentation 18.3).

As high-frequency waves known as the millimeter band have short wavelengths and are ideal for high-accuracy measurement of distances between two points, they are used in precision radar systems. Among these systems, automotive radar operating at 77GHz, a spectrum band reserved for civilian use, is already being used in automotive collision-relaxation systems. To promote the widespread deployment of automotive radar systems, development is actively underway to make such systems smaller and less expensive.

Currently, RF transceiver chips that can directly process 77GHz signals have been based on compound semiconductors(5), which feature excellent high-frequency characteristics but which are also expensive. Baseband chips, which process signals that have been converted to a lower frequency, can be made using inexpensive CMOS technology, which features high integration and low power consumption. Accordingly, because automotive radar has depended on multiple chips - including expensive compound semiconductors - it had been difficult to achieve smaller package sizes, thereby leading to rising unit chip costs, mounting costs, and testing costs. Thus, it had been difficult to enable low-cost automotive radar.

Advances in CMOS micro-processing technology in recent years have led to the development of CMOS circuits that are on par with compound semiconductors in regard to operation speeds and operation frequencies. This has spurred research into using low-cost CMOS circuits as replacements for compound semiconductors in RF transceivers, suggesting that automotive-radar circuitry could be consolidated into a single chip containing the baseband circuitry, resulting in a smaller package and lower costs. Last year, Fujitsu Laboratories announced that it had developed CMOS circuitry that can be used in millimeter-band applications and had produced a high-output amplifier for an RF transceiver chip that operates at 77GHz, but further improvements in chip miniaturization were required to make automotive radar more affordable.

With RF transceiver chips, the following are necessary: a signal distribution circuit that supplies RF signals to both the sending (transmitter) and receiving (receiver) parts, and two conversion circuits that convert the single-phase signal into a differential signal that alleviates noise (Figure 1, a). The size of these signal distribution and conversion circuits tends to be large, and optimizing its layout and reducing the size of the overall circuitry is difficult.

Conventionally, the matching circuits used to ensure efficient transmission of high-frequency signals (which includes 77GHz) have employed a transmission-line(6) element to ensure precise operation. Because transmission-line elements need to be laid out with a signal line and ground line as a pair, the element’s size is relatively large, increasing the chip’s total surface area.

Through the following two advances in miniaturizing CMOS circuit design, Fujitsu Laboratories has made possible the world’s first RF transceiver chip that can operate at 77GHz: 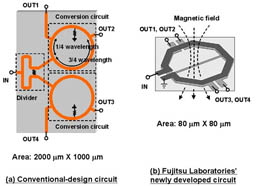 By utilizing a transformer which employs a magnetic inductance principle, in which electric current is generated based on magnetic field fluctuations, Fujitsu Laboratories developed a signal-distribution circuit that splits a single-phase reference signal into two differential signals (Figure 1, b). The result is a signal-distribution circuit measuring 80 micrometers (80 µm) square, requiring less than 1% the surface area of previous circuits.

For the parts of the circuit where space conservation was more important than design precision, Fujitsu Laboratories used compact inductor elements with multilayer construction - a distinctive characteristic of CMOS technology - while using transmission-line elements for those parts of the circuit that demanded the greatest operating precision. This design technology resulted in a chip with both small surface area and accurate operations at 77GHz. 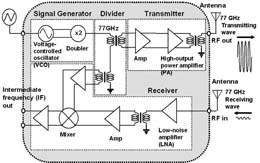 As this RF transceiver that processes high-frequency 77GHz signals can be implemented using the same CMOS technology that is utilized for the baseband chip which processes low-frequency signals, signal-processing circuitry for automotive radar – inclusive of control circuitry – can be integrated onto a single chip, thereby resulting in greater miniaturization. Single-chip integration of these technologies will make it possible for other functions to be embedded into the chip, such as testing functions and self-adjusting functions to correct performance fluctuations caused by changes in ambient temperature, all of which had been impossible to implement as part of the RF transceiver chip when using compound semiconductors. Embedding these functions into a single chip significantly reduces mounting and testing costs for the chips, which are anticipated to significantly lower the cost of automotive radar and promote its widespread use.

To further enhance features of this new RF transceiver chip, Fujitsu Laboratories will develop technologies to enable self-adjustment functions to correct characteristic fluctuations caused by changes in ambient temperature, as well as to embed baseband circuitry into the chip, to realize automotive radar chips that feature greater functionality and higher performance.