Details of this technology were presented at the 2008 IEEE International Electron Devices Meeting (IEDM) held from December 15 to 17 in San Francisco. (Session/Presentation: 19.1)

Due to the fact that power amplifiers for wireless devices demand high power output at high frequencies, currently compound semiconductors such as gallium-arsenide (GaAs) are commonly used, mounted as a chip separate from control circuitry based on a general-purpose CMOS logic chip. If these chips' functions could be integrated onto a single chip, it would enable cost reduction of the overall module and likely speed adoption of wireless devices to be used with wireless communication standards such as WiMAX and LTE(3). Thus, there is a need for transistors that are compatible with CMOS logic process technology, and which can satisfy the requirements of power amplifiers necessary for WiMAX and other wireless communication standards. 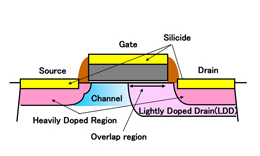 The typical method for raising the breakdown voltage of a CMOS transistor has been to widen the gap separating gate and drain. This new structure suppresses on-resistance effectively compared to the conventional method, without increasing the gap.

Furthermore, this new structure is believed to be highly compatible with standard transistors with 3.3 V I/O(5), since it requires only the additional steps of forming the LDD region and the custom channel region. 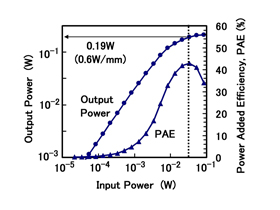 By using 45nm process technology to apply the new transistor's technology to standard transistors with 3.3 V I/O, Fujitsu developed the world's first transistor that raises the breakdown voltage from 6 V to 10 V. In regard to features that make the new transistor suitable for use in power amplifiers, power output of 0.6 W per gate width of 1mm (0.6 W/mm) was reached at maximum oscillation frequency of 43 GHz (Figure 2), thereby demonstrating sufficient performance for use as a power transistor in WiMAX. The new transistor also produced good results in basic reliability testing.