Compared to current 2.5" models(2), the new series improve performance by 60% in terms of internal transfer speeds. They are also more environmentally friendly, with halogen-free(3) design - a first for Fujitsu's enterprise HDDs - and industry-leading power efficiency. Moreover, the series boast perpendicular magnetic recording(4), which enables increased recording density and allows the MBD2 series to have capacities up to 300 GB(5), noteworthy for 2.5" HDDs. The new models are well-suited to a range of applications, from servers to high-capacity storage systems. 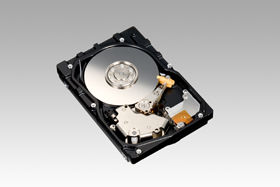 While the enterprise storage market continues to demand high performance and high reliability, there has been a growing push for environmentally friendly design that minimizes heat generation, power consumption, and space requirements. As an alternative to 3.5" HDDs, which have been widely used in the enterprise market, there has been increasing interest in 2.5" models that can deliver superior performance in a smaller footprint.

Fujitsu is responding to these needs with its newest releases, the 10,025-rpm MBD2 RC series and 15,000-rpm MBE2 RC series, both of which provide standard support for the 6Gb/s SAS interface.

Both series use perpendicular magnetic recording, which enables capacities up to 300 GB in the MBD2 RC series and up to 147 GB in the MBE2 RC series. The new models thus reduce space requirements while providing higher storage capacities.

In addition, the new series improve maximum internal transfer rates by 60% over current 2.5" models. By supporting the latest SAS-2 interface specification, they also offer faster data-transfer rates (600 MB/s) between the drive and the host.

In addition to complying with the EU's RoHS Directive(6), the new models are also Fujitsu's first enterprise HDDs to comply with halogen-free initiatives.

The new offerings are the most recent products of Fujitsu's Green Policy Innovation program, which was unveiled in December 2007 to promote energy-efficient products and services as a way to help customers lower their ecological footprint.

Capitalizing on the vast experience and reputation for reliability that Fujitsu has accumulated through over 40 years of HDD development, these products deliver the superior quality and environmentally friendly features that customers have come to expect from Fujitsu.