Fujitsu Laboratories Ltd. announced today the development of a high-performance power amplifier based on gallium nitride (GaN)(1) high electron mobility transistors (HEMT)(2), which as a hybrid amplifier - an amplifier in which the transistor and capacitor are each mounted on separate semiconductor package substrates - features the world's highest output performance in terms of power and efficiency in the C-band(3) to X-band(4) radio frequency bandwidths above 5GHz. This technology opens the potential for higher performance and functionality in broadband and radar communication systems, in particular for airplane radar systems and other instruments that use multiple frequencies, which could be accommodated by a single amplifier. Furthermore, in comparison with conventional power amplifiers that use gallium-arsenide (GaAs), the new ultra-wideband (UWB) GaN-HEMT-based amplifier features higher efficiency(5), thus enabling a reduction in the size of cooling equipment, which is anticipated to result in power amplifiers that are smaller and lighter.

Details of this new technology were presented at the 2008 IEEE Compound Semiconductor IC Symposium (CSICS), held in Monterey, California from October 12-15.

In order to expand radar detection ranges and the distance that radio waves in wireless communications can travel, it is necessary to increase the output power of transmitters. In addition, in order increase transmission capacities and heighten the detection performance of radar that detects multiple targets, it is necessary to expand the bandwidth of transmitters and enable them to handle multiple channels. Airplane radar systems need to use two different types of transmitters so they can switch back and forth between the C-band, which is relatively impervious to the effect of atmospheric precipitation, and the X-band, which enables high-resolution measurement. If a transmitter could handle ultra-wideband frequencies spanning from the C-band to the X-band, then just one transmitter would suffice, which would enable systems that are more compact.

Conventionally, GaAs transistors have been used in wideband high-output amplifiers; however the output of many GaAs transistors needs to be combined in order to generate sufficient transmission output, leading to a reduction in efficiency as a result of losses in the matching circuit(6). Therefore, instead of GaAs, in recent years there has been a surge in efforts to develop GaN-based HEMT amplifiers which have a larger dielectric breakdown field(7) and the potential to generate higher output levels.

It is widely known that monolithic microwave integrated circuits (MMICs) - which include a transistor, capacitor, resistor, and circuit interconnects all mounted on the same semiconductor substrate - enable wideband characteristics at high frequencies such as the C- and X-band range. However, due to the aforementioned problems faced when using GaAs transistors, MMICs using GaAs have been unable to deliver sufficient levels of output and efficiency.

On the other hand, in trying to apply MMIC technology to GaN HEMTs which feature high operation voltages, the breakdown voltage of the chip capacitor has been insufficient. By using a hybrid integrated circuit instead, in which the transistor and capacitor are mounted separately, the impedance problem is eliminated because a high-breakdown voltage-capacitor can be used. However, as wires used in the signal line connections or ground connections reduce the amplification factor of high-frequency signals, thereby increasing frequency variance, it has been thus far difficult to generate high efficiency in a wide bandwidth.

Fujitsu Laboratories developed a C- to X-band hybrid GaN HEMT power amplifier that resolves the aforementioned issues. Key features of the technology include the following:

These technologies enabled the generation of both high output power and high efficiency at high frequencies across wide bandwidth. In addition, although it is a hybrid power amplifier, the new amplifier is compact, measuring just 6.0mm x 6.6mm (Figure 2).

Figure 1: Diagram of a GaN HEMT chip with via-holes 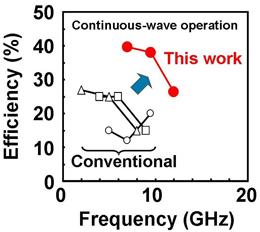 This technology enables transmitters to handle multiple channels and enables the use of multiple frequencies with differing characteristics, opening the horizon to communication systems that can offer higher performance and functionality, such as broadband communications and radar systems that can use multiple frequencies. The technology can also be used in measuring instruments, for which output at high frequencies had been insufficient, in order to measure the performance of amplifiers used in broadband communications and radar systems. Moreover, because the new GaN-HEMT-based amplifiers are more efficient than conventional amplifiers using GaAs, it is expected that reductions in size and weight of the equipment box, which houses the amplifier and cooling system, can be made possible.

Fujitsu plans to widely use this technology in areas that require high-output broadband performance, such as wireless communications equipment and radar systems.