Fujitsu Laboratories Ltd. announced today the development of a new high-efficiency, high-output amplifier based on gallium-nitride (GaN)(1)high electron mobility transistors (HEMTs)(2) that produces over 300 watts (300W) of power in the C band(3), with 60% efficiency(4) as a ratio of DC input power converted to high-frequency output power. Use of GaN HEMT technology increases output power over existing amplifiers using gallium-arsenide (GaAs) transistors (comparison by Fujitsu Laboratories) by more than six-fold, to 320W. This is expected to extend radar detection range by 2.4 times. It is anticipated that replacing the traveling-wave tube amplifiers(5) commonly used for high output power applications with this new technology will enable smaller, lighter, more energy-efficient, and longer-lasting transmission systems for applications including satellite communications, next-generation mobile phone base stations and radar.

Details of the new technology were presented at the 2008 IEEE Compound Semiconductor IC Symposium (CSICS), held in Monterey, California from October 12 - 15.

In order to increase the capacity of satellite communication transmissions and extend radar detection range, there is a need for high output power of microwave(6) transmitters. Conventional high power microwave transmitters have used traveling-wave tube amplifiers and solid-state amplifiers(7). Due to the fact that traveling-wave tube amplifiers are built around vacuum tubes, they have shorter life spans than solid-state devices and are relatively large and heavy because they require high-voltage power sources. High output power solid-state amplifiers based on GaAs transistors, on the other hand, can provide only low output power from a single element due to their low breakdown voltage, thus requiring composite output from many transistors to achieve adequate transmission power. The loss attributable to this composite circuitry results in reduced efficiency. Thus, development of amplifiers using GaN HEMTs, which feature higher output power and better heat dissipation than GaAs transistors, has been underway in recent years.

Transistor chips for high-output-power amplifiers are configured with multiple transistors arrayed in parallel. With a single input and output, the signal that moves along the chip center and the signal that moves along the edges traverse different lengths of wired lines, inducing a phase difference. The result is that the transistors are operating out of phase with each other, making it difficult to fully maximize the high output power characteristics inherent in the transistors.

These technologies enable the transistors to operate uniformly and to maximize the full high-output power potential inherent in GaN HEMTs. 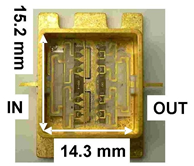 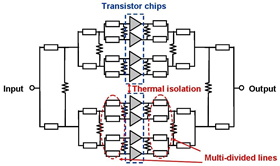 Figure 2: Structure of the amplifier circuit 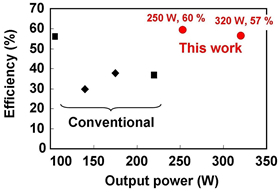 Fujitsu Laboratories developed two C-band GaN HEMT amplifiers with excellent characteristics - one that features 320W output power with 57% efficiency, another featuring 250W output power with 60% efficiency, both which feature the world's highest output performance for the C-band and which significantly outperform the best previously-reported performance for high-output amplifiers above 100W, which was 220W per package (Figure 3). The 320W amplifier exceeds the output power of conventional GaAs amplifiers more than 6-fold (comparison by Fujitsu), which will enable the extension of wave transmission ranges by 2.4 times.

It is anticipated that traveling-wave tube amplifiers typically used in high-output applications can be replaced by this newly developed GaN HEMT technology, enabling smaller, lighter, more energy-efficient, and longer-lasting transmission systems for such applications as satellite communications, next-generation mobile phone base stations and radar.

Fujitsu Laboratories anticipates that this technology will find broad applications as a replacement for traveling-wave tube amplifiers used in applications requiring high output power and high efficiency, such as wireless communication devices and radar.