The FLASHWAVE 7500 series, which includes a Reconfigurable Optical Add/Drop Multiplexer (ROADM)(1) for building high-speed optical networks, has already established a solid track record in North America and Japan, and this deployment will mark the first by a customer in Asia. Fujitsu plans to continue expanding the reach of its optical wavelength division multiplexing equipment globally as customers in Asia-Pacific (APAC), Europe, the Middle East and Africa (EMEA) construct next-generation networks. 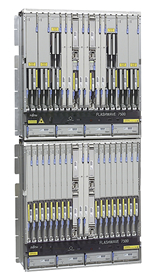 In Vietnam, there has been a sharp increase in the demand for next-generation networks due to a surge in the number of mobile phone subscribers. In order to meet these growing needs, a trunk-line network capable of handling larger processing volumes has become necessary.

In view of these developments, the Vietnam Posts and Telecommunications Group is leading the construction of a next-generation network. For the new optical trunk-line network in the country's southern region, Vietnam Telecom National, which operates under Vietnam Posts and Telecommunication Group, will deploy Fujitsu's FLASHWAVE 7500 wavelength division multiplexer. This trunk-line network will traverse approximately 3,000 km in Vietnam's southern region, tying together the region's 21 provincial capitals, and is scheduled to be completed in early 2009.

Vietnam Telecom National selected the FLASHWAVE 7500 series because of its technical sophistication, Fujitsu's strong track record in supplying equipment to Vietnam's telecommunications market, and the technical support to be provided by VNPT-Fujitsu Telecommunication System Limited(2), a joint venture between Vietnam Posts and Telecommunications Group and Fujitsu.

Fujitsu's optical transmission systems are already widely used by major telecom carriers and cable television companies in North America and Japan, where the spread of broadband networks has accelerated.

As broadband and mobile systems spread through APAC and EMEA, demand for advanced networking infrastructure will grow accordingly. With Fujitsu's strong track record and know-how, the company is ideally positioned to contribute to the creation of next-generation networks optimized to the needs of customers worldwide.

Features of the FLASHWAVE 7500 Platform

With Wavelength Selective Switch(3) technology, which makes efficient use of optical signals, the FLASHWAVE 7500 system permits setting and changing optical signal paths by remote operation. ROADM technology provides for cross-connecting, or splitting an unmodified optical signal among multiple paths. This allows for vastly lower power consumption and other operating costs compared to conventional equipment, which requires conversion into electrical signals.

The FLASHWAVE 7500 platform supports a wide range of interfaces, including SONET/SDH(4), Ethernet, and other data interfaces.