Fujitsu Limited today announced that its PalmSecure palm vein biometric authentication system has been selected for use in IT solutions offered by Jiangsu Province-based systems integration company Sinosoft Technology Plc.

Sinosoft Technology offers a wide range of solutions to both private-sector companies and public-sector institutions, including general business systems and e-government systems. These systems typically employ user IDs and passwords to control access, but since users need different passwords for each application and can forget their passwords, the conventional approach causes inconvenience and confusion. In addition, highly sensitive systems require stricter security because passwords are susceptible to being leaked or hacked, raising the risk of fraudulent access.

Impressed by the accuracy, resistance to forgery, and contactless operation of Fujitsu's biometric palm vein authentication technology, Sinosoft Technology adopted the PalmSecure system for use in its IT solutions. PalmSecure has already been successfully deployed at some of Sinosoft Technology's major clients, including in access control systems for administrative applications for the City of Nanjing Construction Committee, the Yuhuatai Ward government in Nanjing, and the Jiangsu branch of China Eastern airlines. 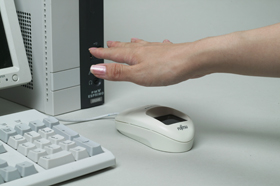 The City of Nanjing Construction Committee uses Fujitsu PalmSecure systems supplied by Sinosoft Technology for a number of e-government purposes, including executive affairs and the city office intranet. With the addition of biometric palm vein authentication equipment, a single authorization grants comprehensive access to the system. This has eliminated problems caused by needing multiple passwords for different applications and forgetting passwords, while preventing fraudulent access using stolen credentials. The Yuhuatai Ward government is using PalmSecure to control staff logins to the administrative system.

PalmSecure is being used in China's private sector as well, with China Eastern airlines having installed it in their Jiangsu branch as the access control for their business system and ticket-reservations system.

Sinosoft Technology and the Fujitsu Group look forward to future opportunities to work together developing solutions using biometric palm vein authentication technology as a way to improve security and convenience for their customers.

1. Palm vein data is internal to the body and therefore difficult to forge

Because the pattern of palm veins is internal to the body, it is difficult to forge. Compared to veins in the fingers or the back of the hand, the pattern of veins in the palm is both complex and stable, resulting in a very high level of authentication accuracy, with a false rejection rate of 0.01% and a false acceptance rate of 0.00008%(1), making for a system that is both trustworthy and secure.

Fingerprints can be difficult to register or authenticate for people with skin abrasions or even dry skin. By contrast, palm vein scanning is almost completely unaffected by such external or physically superficial factors. Furthermore, unlike fingertips, palm vein authentication has been demonstrated to be relatively unaffected by ambient temperatures. Fujitsu has collected a global data sample of 150,000 palm vein patterns from 75,000 people and has confirmed the system's authentication accuracy and applicability. Within that data sample, all test users were effectively enrolled, demonstrating the system's high degree of applicability.

Authentication is performed by passing one's hand above the scanner, an action that is natural, easy, and hygienic. Because there is no hardware being touched by multiple people, it does not engender psychological resistance.

(This is a summary version of a press release issued by Sinosoft Technology Plc., Fujitsu (China) Co., Ltd., and Fujitsu Frontech (Shanghai), Ltd.)