Fujitsu Laboratories Ltd. and Fujitsu Limited announced today, as a world's first, the development of a transmitter operating in the 70-100 GHz band using impulse radio(1) that is capable of transmitting data at speeds of more than 10 gigabits per second. This new development eliminates the need for oscillators and other hardware that had been required for use of earlier millimeter-band transmitters, thus enabling a smaller millimeter-band transmitter. As a substitute for fiber-optic high-speed lines, the new transmitter could be used in wide range of applications geared to help bridge the digital divide(2), including for platform networks and short-range wireless LANs.

This research was carried out as part of the Research and Development Project for Expansion of Radio Spectrum Resources, sponsored by Japan's Ministry of Internal Affairs and Communications. Details of this technology were presented at the 2008 IEEE MTT-S International Microwave Symposium (IMS2008), being held from June 15 - 20 in Atlanta.

With the rapid expansion in mobile phone and Internet users, along with mounting data transmission volumes associated with video and other media, fiber-optic cabling has been used as the medium of choice for trunk-line data networks. But laying such fiber can be difficult when it needs to cross rivers or straits, mountains, roads or train tracks, thereby stalling the buildout of these networks. This has created a demand for an alternative to fiber-optic cabling in these less accessible areas, a wireless one that would offer high transmission speeds (10 Gbps). A high-capacity wireless medium is also becoming increasingly necessary in times of emergency, such as natural disasters or other incidents.

Wireless transmissions with speeds exceeding 10 Gbps are practical using millimeter-band (30-300 GHz) frequencies, which are seldom used commercially and where wide swaths of bandwidth can be readily secured. Within that band, the so-called "radio window" of 70-100 GHz(3) is attractive because signals are relatively unaffected by passage through the atmosphere, allowing them to travel several kilometers or more.

Transmitting in the 70 - 100 GHz band, however, has involved multiple single-purpose electronic components, with little progress on miniaturization. This sparked interest in the development of impulse-radio technology, which needs no oscillator, and the transmitter (millimeter-ban pulse transmitter) can be constructed using only two components: an impulse emitter and an amplifier (see Figure 1). However, 70 - 100 GHz wireless communications required breakthroughs in generating high-energy pulse signals and the development of filters with low energy losses.

Overview of the Newly Developed Technology

To implement millimeter-band transmissions at rates of more than 10 Gbps, Fujitsu and Fujitsu Laboratories developed the following impulse-radio technologies.

These two technologies were combined to create a millimeter-band pulse transmitter (see Figure 2). This resulted in the world's first impulse radio transmitting at over 10 Gbps in the millimeter band (in this case, 78-93 GHz). The new transmitter makes it possible to dispense the oscillator, mixer, and other components that had been needed in previous millimeter-band transmitters, resulting in a compact package that is only approximately 30% as large as its predecessors. 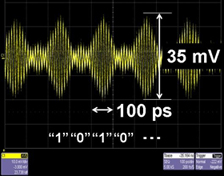 These results established the basic technologies for millimeter-band wireless communications equipment, which could be used as an alternative for fiber-optic cable in a way that could help bridge the digital divide and bring broadband to locations otherwise inaccessible due to rivers, roads, geography, or a natural disaster. This technology could also be used for a wide range of applications, such as indoor high-speed wireless LANs and high-resolution radar.

Fujitsu Laboratories plans to combine the transmitter with a receiver, to conduct transmission testing with a fixed target. Field testing will be conducted, targeting development of practical-use systems by around 2012.