-7,200 RPM mechanism for enterprise IT equipment and industrial applications-

Fujitsu Limited today announced that it has developed a new series of 2.5" hard disk drives (HDDs) specifically designed for 24-hour continuous operation and are available in a category-leading capacity of 250 GB(1) and a rotational speed of 7,200 RPM. Sales of the new MHZ2 BK Series will start at the end of July 2008. 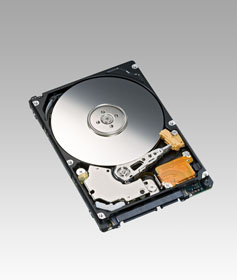 The MHZ2 BK Series is intended to be used in demanding environments with high-frequency access, including entry-level servers or storage systems in enterprise IT equipment, and ATMs or POS systems in industrial applications, where reliability is paramount.

Another feature of the new series is that it has industry-leading power conservation, requiring a low 2.3 W for read and write operations. The series is one of many new products announced as part of Fujitsu's Green Policy Innovation program, unveiled in December 2007 to promote energy-efficient products and services as a way to help customers lower their ecological footprint.

Whether for use in industrial applications, such as ATMs, POS systems, or for enterprise IT equipment, such as entry-level servers and storage systems, there is a need for HDDs that deliver exceptional reliability and meet a variety of needs, such as for 24-hour continuous operation and high-frequency access, as well as for lower heat generation and reduced energy consumption.

To satisfy the need for a 2.5" HDD with a capacity of up to 250 GB designed for 24-hour continuous operation in enterprise IT equipment or industrial applications, on May 30, 2008 Fujitsu will begin sales of the MHZ2 BS Series, which has a rotational speed of 5,400 RPM. The MHZ2 BK Series, which runs at 7,200 RPM, is designed for customers who demand HDDs with supreme performance and reliability.

The new series was designed with the environment in mind, requiring a low 2.3 W for read and write operations, while the MHZ2 BS Series requires only 2.1 W, ranking them both among the most power-efficient HDDs in the industry. They are also manufactured in compliance with the EU's RoHS Directive(2), which limits the use of hazardous substances.

Both series use the high-throughput 3.0 Gb/s SATA interface(3) and minimize the rotational vibration that poses problems in enterprise IT equipment and industrial applications, helping ensure continuous high performance.

Moreover, capitalizing on the vast experience and reputation for reliability that Fujitsu has accumulated through over 40 years of HDD development, the series delivers the superior quality that customers have come to expect from Fujitsu.