Fujitsu Limited today announced the release of the MHZ2 CJ Series of 320 GB(1) 2.5" hard disk drives with automatic hardware-based encryption to effectively secure data against theft or loss, along with the industry's highest rotational speed of 7200-rpm and a 3.0 Gb/s Serial ATA interface(2). The new series of drives for computers and external storage devices will be available at the end of May 2008. 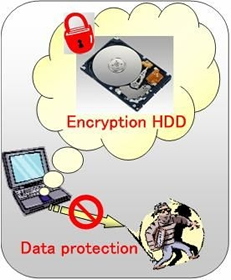 This series is the first hard disk drive in the world to support the 256-bit Advanced Encryption Standard (AES)(3). The drive implements the AES hardware encryption directly into the processor chip of the hard disk drive, resulting in more robust security and faster system performance than software-based encryption.

All data stored on the hard disk drive can be erased instantly, in less than a second, using the advanced secure erase feature. For public institutions and companies that handle large amounts of personal and other confidential data, this dramatically lowers the time and cost involved in wiping clean the hard drives of computers that are disposed of or reused.

With the growing problem of information theft and new laws protecting personal information, interest in data security is extremely high, especially as disk capacity increases and users write vast amounts of personal and other data on their drives. Lost or stolen computers with high-capacity hard drives put confidential information at risk, making the need to secure the data stored on those hard drives all the more urgent.

The conventional response to this problem has been the use of BIOS passwords(4) and software-based encryption. Seeking a more robust form of data security, Fujitsu has now developed 2.5" hard disk drives with hardware-based AES encryption using industry-leading 256-bit key.

The built-in AES automatically encrypts all data when storing it on the hard disk drive and decrypts the data when read. Unlike software-based encryption, the key does not reside in the computer's memory. This makes it more resistant to attack and imposes no processing overhead on the CPU, optimizing system performance.

Moreover, with growing awareness of the problem of data stored on the hard drives of computers, anyone planning to discard or reuse a computer has been obliged to use specialized software to overwrite all the user accessible data blocks on the hard drive multiple times, a costly and time-consuming proposition. This new series of drives includes an advanced secure erase feature to dramatically reduce the total cost of ownership to public institutions as well as private enterprises.

Fujitsu is an active member of the Trusted Computing Group(5), an organization that promulgates and disseminates standards for security-related technology. The company plans to continue releasing products that respond to its customers' needs for information security.