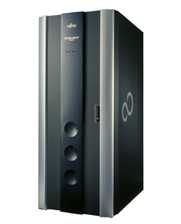 Fujitsu also announced that the PRIMEQUEST 580A posted the fastest results in the industry on the two-tier SAP® Sales and Distribution (SD)(1) Standard Application Benchmark on a system running Microsoft® Windows Server® and the SAP ERP application Release 6.0. Through these results, Fujitsu demonstrates that PRIMEQUEST servers deliver the world's highest performance on the two-tier SAP SD Standard Application Benchmark running both Windows Server®(2) and Linux(3).

The PRIMEQUEST line of mission-critical servers combines the open-standard architecture of Itanium® processors and Linux and Windows Server® operating systems with the high-reliability hardware technology Fujitsu has accumulated through its long track record in mainframe systems.

To complement the latest operating systems, the PRIMEQUEST 540A and PRIMEQUEST 580A models now include dynamic partitioning, making it possible to dynamically change hardware configurations that support partitioning.

With systems running Red Hat® Enterprise Linux 5.1 and Microsoft Windows Server® 2008, dynamic partitioning makes it possible to balance work load among system boards while the systems are still running. If CPU or memory demands increase due to increased data volumes or the number of users, backup system boards automatically perform load sharing to increase processing capacity and ensure the continuity of service.

In addition, with systems running Windows Server® 2008, system boards can be swapped live, so that if a system board starts to show signs of failure, a backup can be swapped in without interrupting the continuity of service, to minimize any potential business loss.

SAP, mySAP and other SAP products and services mentioned herein as well as their respective logos are trademarks or registered trademarks of SAP AG in Germany and in several other countries all over the world.