Fujitsu to Exhibit at "Japan Design 2008 - Innovation - " Expo in Milan

Fujitsu Limited today announced that it will be an exhibitor at the "Japan Design 2008 - Innovation - " exposition, which will run from April 16 to 20 in Milan.

Sponsored by the Japan Industrial Design Promotion Organization, the expo is being held as part of the Milan Salone (Salone Internazionale del Mobile), the world's largest interior design trade show. It will showcase cars, appliances, electronics, housewares and other products from 15 leading Japanese manufacturers. Exhibitors will be bringing their latest prototypes, using the Milan venue as an opportunity to exhibit before a global audience.

Since 2005, Fujitsu has actively exhibited its concept designs for PCs, mobile phones, and other products at international expositions. Under the theme of sustainable design(1), the company will use the Japan Design 2008 - Innovation - exposition to showcase its "WoodShell" concept PC with a wood-based housing, along with the FMV-BIBLO NX95Y/D, a notebook on sale in Japan which uses bio-based plastic materials for part of its housing.

The WoodShell adopts natural materials (forest-thinned cedar) and bio-based plastics for its housing and parts. The prototype PC that is not merely an environmentally friendly tool but an object of enduring style and utility. 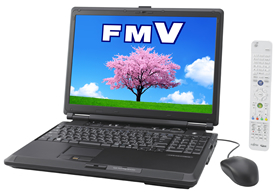 Amid growing concern over environmental problems, bio-based plastics have attracted considerable attention as an environmentally friendly material which lowers the burden on the environment by using less petrochemical-based materials to reduce carbon dioxide emissions.

In 2002, Fujitsu became the first computer manufacturer to develop corn-based plastic and adopt the environmentally friendly material for PC parts. Though the original bio-based plastic was used for a limited number of smaller parts, Fujitsu has made gradual improvements to its properties to satisfy various manufacturing requirements and increase the percentage used in its notebook PCs. The newly developed bio-based plastic accounts for about 30% of the plastic material in the housing(2) of the FMV-BIBLO NX95Y/D.