Fujitsu Limited today announced its new MHZ2 BJ series of 2.5" hard disk drives that feature a rotational speed of 7200 RPM and capacities up to 320 GB(1)Sales of the new series will begin at the end of June 2008. The new series is designed for use in high-performance PCs, such as high-end notebook computers and compact desktops. 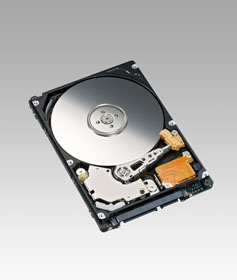 The MHZ2 BJ series requires only 2.3 W of power for read and write operations, ranking it among the most power-efficient drives in its class. The series is one of many new products announced as part of Fujitsu's Green Policy Innovation initiative, unveiled in December 2007 to promote energy-efficient products and services as a way to help customers lower their ecological footprint.

As PCs offer an increasing number of sophisticated functions, there is an increasing need for high-capacity hard disk drives with improved processing capabilities.

But with growing worldwide concern over global warming and other environmental problems, there is also a demand for hard disk drives that consume less electricity.

Fujitsu has responded to these needs with hard disk drives that feature a rotational speed of 7200 RPM and capacities up to 320 GB, double the capacity of previous models. In addition, the series also supports the Serial ATA 3.0 Gb/s interface(2), which has been rapidly adopted throughout the industry, for high-speed data transfers.

As an environmentally friendly product, these hard disk drives use 2.3 W for read and write operations, ranking them among the most power-efficient 2.5" HDDs in the industry. They are also manufactured in compliance with the EU's RoHS Directive(3), which limits the use of hazardous substances.

Capitalizing on the vast experience and reputation for reliability that Fujitsu has accumulated through over 40 years of HDD development, the new series delivers the superior quality that customers have come to expect from Fujitsu.