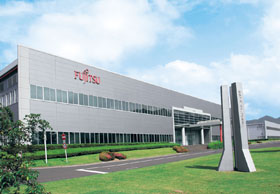 While many of Japan's computer manufacturers have moved manufacturing to outside contractors in foreign countries to reduce costs, Fujitsu continues to manufacture its high-quality notebook computers in Japan and handles its computers' creation in-house, from the initial design of the circuit boards to manufacturing and final assembly, even tailoring solutions to meet customer needs.

With the introduction of the Toyota Production System in 2005, Shimane Fujitsu has shortened lead times, improved operations management, and reduced costs while maintaining quality, enabling the company to quickly launch new models in response to customer needs.

In August 2000, Shimane Fujitsu passed the 5-million milestone, and passed the 10-million mark in June 2003. Today, the company produced and shipped its 20 millionth computer, marking the occasion with a ceremony and the donation of notebook computers to the town of Hikawa and in the prefecture of Shimane, western Japan, where the plant is located.

As a world-class manufacturer, Shimane Fujitsu is committed to producing in Japan and upholding the world-leading standards of quality that "Made in Japan" signifies, focusing on achieving greater speed and flexibility in its manufacturing in order to maintain the highest level of customer satisfaction.