BroadOne™ WX300 is world's most compact all-in-one base station

Fujitsu Limited announced today the development of the BroadOne™ WX series of mobile WiMAX(1) base stations. The BroadOne WX300, an outdoor macrocell base station, is light, energy-efficient, and - as the smallest in its class(2) - occupies less space, which makes it economical to deploy. The BroadOne WX300 will be available globally beginning in the second quarter of 2008 (April-June). 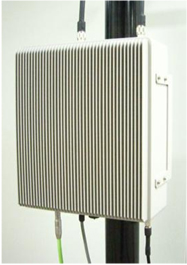 Fujitsu is positioning the BroadOne WX series mobile WiMAX base stations as a key part of its global product solutions for the rapidly emerging wireless broadband industry. Wireless broadband is widely expected to transform the way people live and work in the next-generation network era, as it promises high-speed, high-capacity connectivity to everyone, everywhere.

Fujitsu has designed its new base stations with many features to meet the global requirements for mobile WiMAX networks. The base stations consume low levels of power, deliver superior performance, and, as the smallest base stations available, are easy to install. As a result, mobile WiMAX service providers will be able to build their wireless broadband infrastructure at a lower cost and offer end-users service at more reasonable rates.

With the launch of the base stations, Fujitsu is also introducing its BroadOne brand name to be used for forthcoming wireless products.

The BroadOne Mobile Base Station Series

With these models, Fujitsu will provide mobile broadband solutions for all types of environments and needs.

Features of the BroadOne WX300 Macrocell Base Station

The new BroadOne WX300 outdoor macro base station features world-class efficiency and performance. The unit's high-output transmitter (amp) uses a gallium-nitride (GaN) High Electron Mobility Transistor (HEMT) device(3) that was developed based on ultra-high-speed transistor technology invented by Fujitsu. This device is coupled with Fujitsu digital pre-distortion technology(4), which already has a proven track record in 3G systems, to create two high-output transceivers packaged in a single unit. With a weight of approximately 20 kilograms and volume of 20 liters, the unit is the world's smallest outdoor macrocell base station.

By combining world-class energy efficiency with the world's smallest base station enclosure, Fujitsu has significantly reduced the costs associated with installing and operating base stations, thereby contributing to the global deployment of mobile WiMAX infrastructure. Details of the product will be presented next week at Fujitsu Microelectronics Europe's stand 1J45 in Hall 1 of the GSMA Mobile World Congress 2008 from February 11-14, 2008, in Barcelona, Spain.

The Fujitsu Alliance with Airspan Networks

Fujitsu recently entered into an alliance with Airspan Networks, a company with a global track record in the WiMAX market. Under this agreement, Fujitsu and Airspan will share technology and resell each others' products to offer customers a complete product line and better meet the needs of WiMAX providers.

With the launch of the BroadOne WX300 mobile WiMAX base station, Fujitsu is unveiling its new BroadOne brand name, which covers an integrated series of base stations and other products for the "Long Term Evolution" (LTE) project under which next-generation mobile phone systems will be developed for the rapidly emerging wireless broadband market.

The BroadOne brand name was chosen to reflect the Fujitsu advanced technologies that will enable wireless networks around the world. By bringing easy-to-use networking to as broad a segment of people as possible, Fujitsu aims to become the number one vendor of wireless networking equipment.