- Enables both lowering of line resistance in interconnects and high reliability, vital for 32nm generation technology -

Fujitsu Laboratories Ltd. and Fujitsu Limited today announced their development of technology that enables high-reliability multi-layer interconnects for logic LSIs for 32nm generation and beyond, by using copper with manganese additives in combination with an ultra-thin film barrier metal. Compared to conventional technology, Fujitsu's new technology effectively reduces line resistance in interconnects, and increases endurance against electro-migration(1) - a cause of LSI degradation over time. This technology will enable Fujitsu to provide highly-integrated high-performance LSIs to customers.

Details of this technology were presented at the IEDM (International Electron Devices Meeting), held from December 10 - 12 in Washington, D.C. (Session: 19.6). 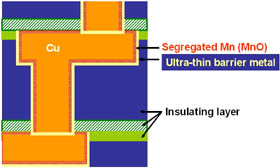 In accordance with electronic devices becoming further compact, as microprocessors becoming increasingly higher in performance and mobile information devices become more multi-functional, there is a growing demand for high-performance, logic LSI devices that feature higher levels of integration and consume less power, a trend that is also driving the development of finer interconnects used in LSI devices. For example, the 32nm generation of logic LSIs that are currently under development will be using copper interconnects measuring 50nm wide. In order to enable the development of higher-performance LSIs, technology capable of achieving high reliability becomes necessary, by limiting the rise of interconnect resistance while in addition reducing age degradation of interconnects.

Key Features of the New Technology

The use of a manganese segregation layer has made it possible to maintain existing barrier performance, as it prevents oxidation of the ultra-thin film barrier metal.

Compared to the copper interconnect barrier metal combination method that had been used up to the 45nm generation, this new technique from Fujitsu for multi-layer interconnects enables the reduction of thickness of barrier-metal films by one-third, and effectively reduces interconnect line resistance to levels that meet the standards laid out for the 32nm generation in the International Technology Roadmap for Semiconductors (ITRS)(2). In addition, by increasing endurance lifetime against electro-migration – a cause for degradation over time - by a factor of 47, high reliability applicable for highly integrated minute interconnects for the 32nm generation and beyond is achieved.

This new technology paves the way for multi-layer interconnect technology applicable for logic LSIs for the 32nm generation and beyond. Fujitsu plans to further develop this technology to provide high-performance highly integrated power efficient LSIs.