- Features transfer speeds of up to 300MB/second -

Fujitsu Limited today announced the development of the MHZ2 BH series of 2.5" hard disk drives with a maximum capacity of 320 GB(1). Sales of the new series will begin in February 2008. 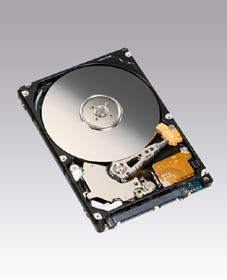 Featuring a storage capacity for 2.5" HDDs that is among the highest in the industry, the MHZ2 BH series delivers transfer speeds of up to 300MB per second. The series is designed primarily for use in compact desktop PCs, notebook PCs, and consumer electronics products, such as HDD recorders.

With the addition of this series to its line of HDDs, Fujitsu offers HDDs that optimally meet a range of customer needs.

Due to higher levels of desktop and notebook PC performance and expanding use of the Internet, demand has been increasing in recent years for HDDs that can accommodate heavier volumes of data, such as video and audio data. Moreover, customers are seeking greater energy efficiency, including limits to the amount of heat generated and reduced power consumption. Fujitsu developed the high-capacity MHZ2 BH series to meet these needs.

Supporting Serial ATA3.0Gb/s interface(2), the MHZ2 BH series delivers transfer speeds of up to 300MB per second. Moreover, capitalizing on the vast experience and innovative technology Fujitsu has accumulated through over 40 years of HDD development, the new series achieves the world's lowest levels of power consumption, operating at only 1.9 watts when reading or writing data.

The MHZ2 BH series also conforms to the RoHS Directive(3) limiting the use of certain hazardous substances.