Fujitsu Limited today announced the development of two new controller LSIs, the MB88388A and MB88389, which support the IDB-1394(1) standard for in-vehicle multimedia networks. Sample shipping of these new LSIs will begin from December 1, 2007.

The MB88388A implements Fujitsu proprietary SmartCODEC, a video codec specified under IDB-1394 international standard for in-vehicle video transmission. SmartCODEC, which was developed by Fujitsu Laboratories Ltd., can transmit high-resolution video without perceptible lag. It is the world's first chip to support car-navigation imaging using the IDB-1394 standard. By combining it with the MB88389 LSI specifically for IDB-1394-compliant audio, it is now possible to realize high-quality rear-seat entertainment at a low price. 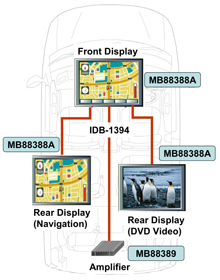 IDB-1394 is an international data networking standard for transmitting video, audio, and other multimedia data over an in-car network. Various automobile manufacturers now view the standard as necessary to enable rear-seat entertainment systems that can play DVDs, show digital TV programming, and offer access to the car navigation system. As such, the standard is expected to come into widespread use.

The MB88388A includes the SmartCODEC codec for video, which was developed by Fujitsu Laboratories and is used in the BT.601 Transport Over IEEE.1394(2) standard. This makes it possible to transmit video from DVD, digital TV, and car-navigation sources at high resolution without perceptible lag. It is thus the world's first chip that can transmit car-navigation video using the IDB-1394 standard. Also, because IDB-1394 can be configured as a multiplexing network, multiple video and audio streams in addition to control signals can be transmitted simultaneously over the same physical layer. This means the car network can carry even more complex information over a single cable, thereby reducing wiring-harness complexity and weight. The MB88389 controller can be integrated into the IDB-1394 network for lower cost audio networking.

Fujitsu plans to expand its range of IDB-1394-compliant offerings, in view of the growth of types of in-vehicle content, and to accommodate multiple data transmissions from peripheral car security cameras, and further system cost reductions.

"We are pleased to see the first fully integrated IDB-1394 compliant LSI product from Fujitsu," said Mark Spain, director of the Automotive Business Unit of Microsoft Corporation. "We support this standard and plan to utilize it for the Microsoft Auto platform designed to create advanced in-vehicle infotainment systems. As digital experiences grow, software and services are expected to converge in the car, requiring standard platforms and enabling technologies like those from Microsoft and Fujitsu."

Fujitsu proprietary SmartCODEC- which can compress video data to one-third in size within 2-3 milliseconds (low latency) - is included in this chip, thus enabling car navigation images to be transmitted over the car network, in addition to DVD and digital TV data.Transmission of such images through an in-car network is not possible with MPEG encoding.In addition, as encoding occurs only within SmartCODEC's internal line memory, an external frame buffer is unnecessary.

2. Part count reduction thanks to IDB-1394-compliant physical layer and link layer implemented on a single chip (shared feature for both of the new LSIs)

These new LSI devices implement both the physical layer(3) and link layer(4) functions specified in the IDB-1394 standard, with support for 100/200/400 Mbps data transmission speeds. The single-chip implementation reduces the number of system parts required.

3. DTCP included to protect copyrights (shared feature for both of the new LSIs)

*1 IEEE-1394b-2002: An extension to the older IEEE1394a-2000 high-speed serial-bus standard used for PCs and audio-visual equipment. Expansions to this standard are currently underway, to enable faster transmission speeds and transmission across longer distances. This standard has been adopted for IDB-1394.

*2 IEC61883-Part 8 (BT.601): IEC611883 is a transmission protocol established by the International Electrotechnical Commission, for digital interfaces of audio and visual equipments. BT.601 Transport Over IEEE-1394 is in the process of being ratified as Part 8.

*6 LQFP: Stands for "Low-profile Quad Flat Package." A type of surface-mounted plastic packaging with an installed height of 1.7 mm or less.