Fujitsu Limited today announced the development of a one-chip system power management LSI for ultra-mobile PCs (UMPCs), to supply power to the system, memory, and chipsets in UMPCs. Sample shipments for the new LSI product, MB39C308, will start from November 2007.

As an industry first for one-chip integration, this LSI complies with the next version of the LPIA (Low Power Intel Architecture) specification proposed by Intel as a low power platform for UMPCs, and meets the next LPIA platform requirement of a 6 channel DC/DC converter(1) control circuit, while also integrating other peripheral components onto the same single chip. This enables the power management system to be reduced to less than one-third (1/3) the size compared to current products from other companies. Increased efficiency of power supply of this LSI can contribute to extending the operating time of the UMPC's battery.

UMPCs are ultra-compact mobile PCs that despite their small size can run the same OS as regular-sized PCs. UMPCs were launched in 2006, and the market size is forecast to reach 5 million units in 2008 (Fujitsu estimate).

For UMPCs, it is necessary to supply differing voltages to the processor, chipset memory, and other parts. To extend the operating time of the battery, reduction of power consumed by the processor and high-efficiency of the power management LSIs are required. Thus, there is a need for power management LSIs that can enable size reduction of the overall power supply system, including control circuits that can supply a large current with high efficiency from the lithium ion battery.

This new LSI was developed based on such needs, and is the industry's first one-chip power management LSI that conforms to power supply systems specifications necessary for UMPC, as outlined by Intel in the 2008 version of the LPIA platform for UMPCs. This product was jointly developed with Fujitsu VLSI Ltd. 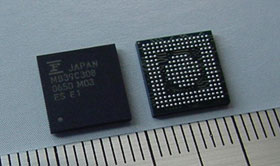 DC/DC converter control circuits, which generate voltages across 6 different channels and which support power for memory (excluding the processor), the chipset and external systems (various applications such as wireless LAN) as outlined in the 2008 version of the LPIA platform, have been integrated onto a single chip.

By utilizing a new LDMOS(2) technology and revising the transistor structure, this new LSI makes it possible to supply power from a lithium ion battery as a large current at high efficiency rates, without dispersion.

3. Reduced size and simplified design of power-managing system through reduction of peripheral components

In accordance with growth of the UMPC market, hereafter Fujitsu plans to expand the line-up of its power management LSIs for UMPCs.

*2 Power Supply Precision: Precision shown is with Fujitsu's evaluation board and evaluation conditions.

*4 Digital Software Start/Stop: a function to start and stop the output voltage, that doesn't depend on the output current, by using a digital counter internally in the LSI.

Company and product names referenced herein are trademarks or registered trademarks of their respective owners. Information provided in this press release is accurate at time if publication and is subject to change without advance notice.