Suitable for Use in Industrial Equipment and Enterprise Applications

Fujitsu Limited today announced that it has developed the new MHY2 BS Series of 2.5" hard disk drives, which are designed for 24-hour continuous operation and are available in storage capacities of up to 200 GB(1) . Sales of the new series will start at the end of August. 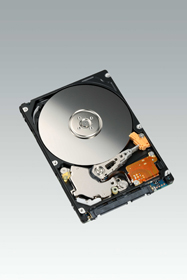 Whether for use in industrial equipment, such as ATMs, POS systems, and medical equipment, or for enterprise applications, such as entry-level servers and storage systems, there is a need for HDDs that deliver exceptional reliability and meet a variety of needs, such as for 24-hour continuous operation and high-frequency access, as well as for lower heat generation and reduced energy consumption. Fujitsu developed the MHY2 BS Series of 2.5" HDDs,with storage capacities of up to 200 GB, to meet these needs.

Models in this series have a disk speed of 5,400 RPM and Serial ATA(2) interface. They are also designed with features that minimize the effects of rotational vibration(3) , which degrades drive performance.

The MHY2 BS Series joins two other series of 2.5" ATA HDDs from Fujitsu that are also designed for 24-hour continuous operation and harsh operating conditions, both of which are already available: the MHW2 BK Series, which features a disk speed of 7,200 RPM, and the MHW2 AC Series, which is designed to withstand extremely high and low temperatures. With these three series, Fujitsu is able to offer HDDs for industrial equipment and enterprise applications that are best suited to customers' specific needs.

In addition, all three of these series are RoHS(4) compliant.

All product names and company names mentioned herein are the trademarks or registered trademarks of their respective firms.