Fujitsu Limited and Fujitsu Laboratories Ltd. today announced their development of a platform technology for 45 nanometer (45nm) generation LSI logic chips, which combines technologies for low power consumption and high-performance interconnect. Compared to previous 45nm technologies on record, the new platform reduces the leakage current that occurs when current is wasted in wait states to one-fifth that of previous levels and reduces interconnect-induced lag times by approximately 14%. The realization of these new 45nm generation platform technologies will enable Fujitsu to offer its customers LSI logic chips that feature even higher speeds, smaller size and lower power consumption than currently available.

Details of the new technology were presented at the 2007 Symposium on VLSI Technology.

The need to achieve higher levels of integration in LSI logic chips is becoming greater, spurred by the higher level of performance needed to support the proliferation of functions in various devices, and the need for multiple processor cores on devices. In light of these trends, for 45nm generation logic technology, in accordance with higher integration levels and enhancements in performance speeds, technologies able to suppress power consumption of devices are becoming increasingly important.

In order to heighten integration levels of LSIs, with each new generation of devices, there is a need to shorten the gate length of each transistor and make the spaces between interconnects narrower. In addition, to achieve high speeds there is a need to minimize the time lag from interconnects between the hundreds of millions of individual transistors within the LSI chip (Figure 1). 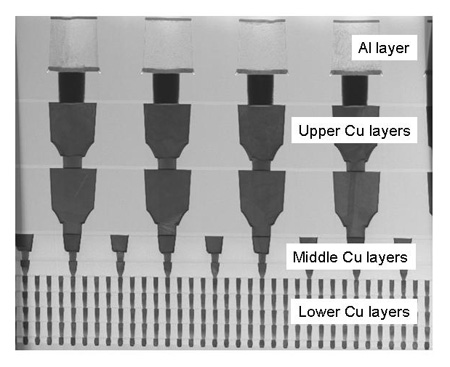 When a the gate length of a transistor is shortened, a problem that exists is increased power consumption attributable to increased leakage current between the transistor's source and drain when no signal voltage is applied at the gate - for example, when a mobile phone is on standby mode awaiting calls and no operation processing is underway.

Fujitsu researchers used nano-clustering silica (NCS), which has a dielectric constant (k) of 2.25 - the lowest of any insulating film reported to date - in a lower interconnect region suitable for the smallest interconnect spaces.

NCS is an insulating material pocked with miniscule holes, enabling both a low dielectric value and high mechanical strength simultaneously. Fujitsu introduced NCS on a partial basis beginning with the 65nm generation. However, for the 45nm generation, the company is using NCS not just within a given interconnect layer but also between different layers to further reduce interconnect capacitance.

These two newly developed technologies enable the reduction of leakage current during standby, while simultaneously increasing operating speed. Fujitsu is targeting 2008 to incorporate these technologies into LSIs that are suited for mobile devices as part of a ubiquitous networking society.

Company names mentioned herein are registered trademarks or trademarks of their respective owners. Information provided in this press release is accurate at time of publication and is subject to change without advance notice.