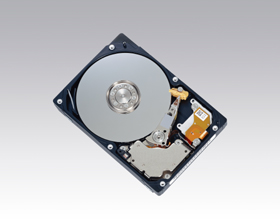 Enterprise customers are looking for HDDs that deliver better I/O performance(4), lower heat levels, lower power consumption, more sophisticated processing performance, and higher reliability. With its new line of 2.5'' drives running at 15,000 rpm and 2.5'' drives supporting the SATA interface, Fujitsu can meet all of these needs.

Fujitsu is also introducing the MHW2 BK series of 7,200 rpm 2.5'' drives that are SATA compatible and designed for 24-hour continuous operation. Available in capacities up to 120 GB(5), they are Fujitsu's first SATA-compatible HDDs that also include built-in functions designed to minimize the adverse effects of Rotational Vibration(6).

All four new series of HDDs are RoHS-compliant(7).

Company and product names referenced herein are trademarks or registered trademarks of their respective owners. Information provided in this press release is accurate at time if publication and is subject to change without advance notice.