Fujitsu Limited today announced its new "Network as a Service" concept, which seeks to deliver innovation to customers' businesses by leveraging the power of network-enabled IT utilization based on an integrated services platform comprising computers, networks and other IT resources, security technologies such as personal authentication, and an array of programs and interfaces for rapid business deployment. The services platform will be created through a combination of Fujitsu's dramatically enhanced FENICS(1) value-added multi-carrier network service, dubbed FENICS II, and a soon-to-be-announced new SaaS (Software as a Service) platform, which will enable network delivery of advanced applications and content.

As the first step in this initiative, Fujitsu has significantly reinforced its FENICS multi-carrier network service, a one-stop, value-added menu of service offerings providing corporate customers with connections to major telecommunications carriers' networks. Beginning in early June, under the FENICS II brand, Fujitsu will gradually roll out several new service offerings with enhanced support for ubiquitous terminals(2) at the increasingly diverse touch points of customers' IT utilization. This will include a new Personal Access Solution that securely authenticates the identity of authorized users. In addition to existing support for corporate intranets, FENICS II will support the globally expanding Internet as well as emerging next-generation networks, providing a safe and secure network utilization environment for workers in their offices as well as people at home.

Details on the second phase of this initiative, the SaaS platform, will be announced in the near future. The SaaS platform will make it easier for customers to rapidly deploy new business operations or collaborate with companies in different industries.

Through its novel Network as a Service approach, Fujitsu seeks to realize a world in which all authorized users on a network can easily access exactly whatever services they need, whenever and wherever they need them, and through whichever method they like. In this way, and as the only IT vendor in the world that can provide one-stop solutions for customers' business expansion encompassing the full range of IT infrastructure, network services, and ubiquitous terminals, Fujitsu will help accelerate customers' field innovation.

Examples of new business scenarios that take advantage of the Network as a Service approach will be exhibited at Fujitsu Forum 2007, which will be held May 17 to May 18 at the Tokyo International Forum.

Network as a Service: Providing services that leverage the power of network-enabled IT utilization

Today IT usage is accelerating at a remarkable pace, and new ways of utilizing IT are constantly being invented. In addition to improving user-friendliness, there are challenges in providing robust security, enabling rapid business deployment, and allowing users to use IT without burdensome restrictions.

Companies need to be able to use IT to link businesses with outside customers as well as internal systems. At the same time, however, actual users want IT to be user-friendly, and they do not want to have to deal with bothersome restrictions.

In providing network-enabled IT services through its Network as a Service approach, Fujitsu aims to quickly create safe and secure business platforms for its corporate customers while maintaining the convenience of IT for users and, moreover, eliminating onerous usage restrictions.

Through the new FENICS II network service offerings, proper identification of authorized users can be assured, and users can access services that are tailored to their individual needs, rather than a one-size-fits-all approach. These would include, for example, remote consulting services based on individual account information or health information, or provision of neighborhood information or information on special store discounts to corporate members who are at a particular place or inside a particular store. In addition, it will become easier to grasp market changes from diverse consumer trends.

Utilizing the menu of IT services offered through its new services platform, Fujitsu will shift from a customer systems approach centered on "construction" of new systems to one driven by customers' "usage" of the IT they need to support new business development. This will enable customers to spend their time more effectively on new product launches or the creation of a new business model, rather than on IT system issues.

Going forward, to enhance its Network as a Service approach, Fujitsu will establish an SaaS platform framework that will include an array of programs and interfaces for quickly launching new businesses, deploying SaaS, linking together and improving services for companies from different industries, as well as enabling IT resources to be accessed on-demand. Details will be announced in the near future. 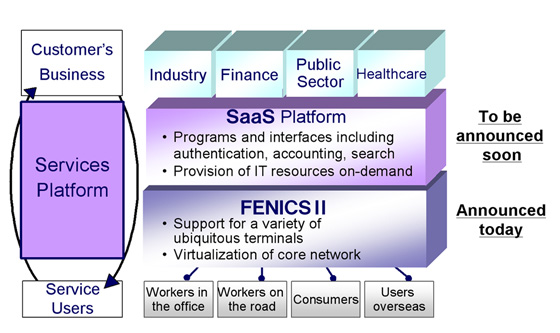 FENICS II is Fujitsu's enhanced multi-carrier, multimedia network service that will provide integrated support for corporate intranets as well as the Internet and emerging next–generation networks. FENICS II uses these various networks to link customers' businesses to users on the front lines through a variety of ubiquitous terminals.

Fujitsu is considering installing Personal Access Keys in a variety of ubiquitous terminals.

FENICS II will support Fujitsu's new ultra-mobile PC being released today, the FMV-LIFEBOOK U-Series, the world's smallest tablet-convertible UMPC, as well as Spotcast (announced in Japan in March 2007), which uses one-seg transmission, and a variety of new ubiquitous terminals, including IC tags and electronic paper. By proposing new usage scenarios that employ these types of terminals, Fujitsu can now extend network services that in most cases up until now could only be provided between specified corporate locations to include mobile workers and other individuals throughout the customer's organization and beyond, thereby providing a safe and secure business platform to support customers' businesses expansion.

The core network of FENICS is interconnected with the networks of telecommunications carriers, mobile networks, and the Internet, and it is designed so that customers can use network services without having to be aware of the network configuration. Fujitsu has now enhanced its FENICS core network so that it can quickly respond to customers' increasingly diversified network requirements.

For outsourcing services overall, including FENICS business, Fujitsu plans to increase sales from the fiscal 2006 level of 460 billion yen to 600 billion yen by fiscal 2008, centering on its services platform.