Fujitsu Limited today announced that it has signed the contract for the upgrade of the Japan-US Cable Network, a submarine fiber-optic cable system, with a consortium represented by seven telecommunications carriers, including AT&T Corp, KDDI Corporation, NTT Communications Corporation, Qwest Communications International Inc., Reach Global Networks Ltd, Softbank Telecom Corp., and Verizon Business. With this transpacific contract, Fujitsu's FLASHWAVE S650 submarine line terminal equipment will be implemented at three landing points each in Japan and the US.

The FLASHWAVE S650 series is capable of providing a significant capacity upgrade to existing systems, more than doubling the original design capacity of 640 gigabits per second (640 Gbps) of the Japan-US Cable Network beyond 1.28 terabits per second (1.28 Tbps)(1). The equipment was selected based on our customers' high evaluation of the product's compact size, multiplex transmission capability, low power consumption and extremely high reliability next to none.

Fujitsu is responding to the rapidly increasing demand for international traffic as a result of the spread of broadband service worldwide, and helping to reduce the burden on telecom carriers investing in this infrastructure. 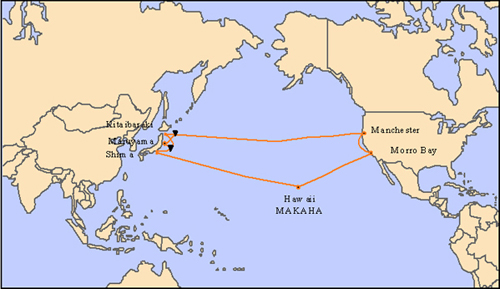 Along with satellite communications, submarine cables comprise an integral component of the world's international telecommunications infrastructure. Submarine cable networks continuously incorporate cutting-edge long distance optical transmission technology and, by making use of their capability for high-speed, high-capacity and high-quality transmissions, play a vital role in the accurate distribution of enormous quantities of information throughout the world.

The FLASHWAVE S650 series is at the core of Fujitsu's upgrade-oriented equipment offerings. This series is capable of fully utilizing the available bandwidth in existing systems and increasing data transmission capacity significantly beyond the original design.

As a result, the series has been deployed in critical systems around the world and has earned high praise from our customers.

The new contract for the Japan-US Cable Network will add the following locations to the regions where this series is installed:

Building on its experience and continuing investments in research and development, Fujitsu is committed to retaining its leadership in the market for submarine cable system supplies and upgrades.