Fujitsu Limited today announced the release of the PRIMERGY BX620 S4 blade server, which is designed to facilitate system expansion and reconfiguration while reducing the workload for systems administrators during server consolidation. The PRIMERGY BX620 S4 is being offered in Japan starting today and will be gradually offered in other markets. 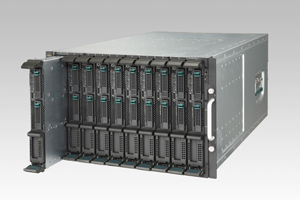 Recently, there has been increasing interest in using blade servers to consolidate ever-expanding systems, thereby making more efficient use of space and operating resources. This also contributes to infrastructure optimization, more effective use of systems investments, and electric power savings. At the same time, the server consolidation process increases the workload of systems administrators, such as requiring repeated storage and network setup.

Fujitsu's new blade server has expandable LAN ports that simplify network setup and is designed so that administrators can change server configuration without affecting the SAN environment. When combined with the company's own middleware, the Systemwalker Resource Coordinator Virtual server Edition V13.2, it provides the higher availability and more efficient utilization that is expected for server consolidation with blade servers.

The new blade server is a key product in Fujitsu's TRIOLE BladeServer IT infrastructure.

1) Up to 10 industry-standard LAN ports

Features a Fibre Channel expansion board equipped with two ports that is capable of high-speed data transfer of maximum 4Gbps.

The CPUs driving these new blade servers are the Intel® Xeon® L5320 1.86 gigahertz (1.86 GHz) processors, which reduce energy demands by as much as 60% compared to the previous generation of processors with equivalent performance(3).

The chassis features high-bandwidth midplane and works with PRIMERGY BX620 S4 blade servers, with up to 10 LAN ports each. Throughput between blade server and embedded switch is 4.3 times greater than existing models, achieving communication speed of 10 Gbps and enabling the flexible network configurations required for server consolidation.

This Fibre Channel switchblade supports communications rates up to 4 Gbps. It comes standard with 12 ports (4 uplink, 8 downlink) and is expandable to 16 ports (6 uplink, 10 downlink). This product is scheduled to support a “SAN Connectivity Virtualization Option”, which confers a virtual World Wide Name to the Fibre Channel on top of the blade servers in the near future. This option will virtualize the blade servers, and in concert with Fujitsu's Systemwalker Resource Coordinator Virtual server Edition V13.2 middleware, will also virtualize the SAN connection between servers and storage. It also supports a mixed environment of physical servers and virtual servers running VMware Infrastructure 3, making it possible to change the physical server configuration without changing storage or networking settings, for plug-and-play convenience. The system also automates the process of detecting faults and bringing reserve servers online, and can manage with a single reserve server (physical or virtual), for a low-cost, high-availability “N+1 standby” blade system.