The new technologies were developed under the strategic partnership established between Yokogawa and Fujitsu in March of 2006 to jointly develop core system technologies and key components for ultra high-speed optical transmission systems, and with the cooperation of Fujitsu Laboratories Ltd. Sample products were on display at the Optical Fiber Communication Conference and Exposition (OFC) and the National Fiber Optic Engineers Conference (NFOEC) 2007, held in Anaheim, California from March 27 - 29, 2007.

Typically, when transmission speed is increased, distortion caused by polarization mode dispersion (PMD)(2) becomes pronounced, limiting transmission reach. For example, in the case of transmission of a 40 Gbps signal using a standard binary modulation(3) in an optic fiber that meets the PMD specification (0.2 ps /√km) recommended by the ITU-T(4), transmission reach is limited to a maximum of 100 km. Thus, inter-city transmission, which requires long-distance transmission of more than several hundred kilometers, has not been possible.

Seeking to overcome this obstacle, advances are being made in investigating DQPSK-type transmission, which is tolerant to waveform distortion due to PMD, and its high performance has been confirmed in the laboratory experiments. However, the configuration of a DQPSK format is complex, and thus large size and high power consumption of the optical transceivers have proved to be challenges. 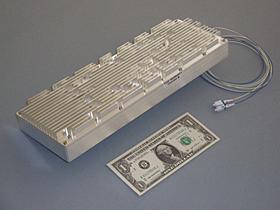 3. Compact Optical Transmission Module: Control technology was developed that allows the newly developed key devices to operate in a stable manner as well as mounting technology that enables a compact size, making possible a compact 110 mm x 320 mm x 40 mm package equipped with all functions necessary for 40 Gbps DQPSK in the transmission equipment and a low-power consumption of 35 W (with case temperature of 72°C).

100 units of 40 Gbps DQPSK optical transceivers were manufactured and transmission performance and stable operation despite environmental changes, such as temperature fluctuations and variations in supply voltages, was confirmed. Furthermore, the transmission reach as limited by PMD was found to be approximately eight times better than that of standard binary modulation (figure 2).

The resulting technology is expected to significantly reduce the time it will take to implement major inter-city high-capacity optical networks. 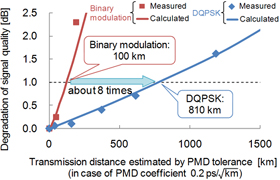 Yokogawa's global network of 18 manufacturing facilities, 83 companies, and over 650 sales and engineering offices spans 28 countries. Since its founding in 1915, the US$4 billion company has been engaged in cutting-edge research and innovation, securing more than 7,000 patents and registrations, including the world's first digital sensors for flow and pressure measurement. Industrial automation and control, test and measurement, information systems and industry support are the core businesses of Yokogawa. For more information about Yokogawa, please visit our web site at www.yokogawa.com