Details of this technology have been presented at The Optical Fiber Communication Conference & Exposition (OFC) 2007 being held in Anaheim, California from March 25. The technology is also being exhibited and demonstrated at the Fujitsu booth of the exhibition accompanying the conference.

Along with the arrival of a true broadband communicative and ubiquitous networking society, the amount of data traffic has been rapidly increasing. In order to enable high-capacity optical networks, DWDM systems, which use a single optical fiber for optical signals of several different wavelengths, are being utilized. Wavelength tunable optical transceivers are becoming important as components that enable OADM(3) functionality in next-generation networks, as the transceivers enable reduction of component types required- attributable to the characteristic the transceivers feature in which wavelengths can be switched while being used by the network - and realization of DWDM systems at low overall cost.

Currently, large 300 pin-type devices(4) are used as wavelength-tunable transceivers for DWDM systems. However, in order to make the overall systems smaller and with higher capacity, there is a need to create optical transceivers that are even more compact. 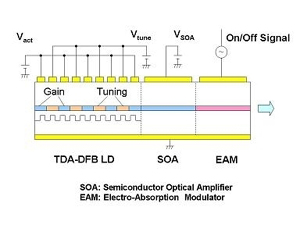 In developing a XFP-type wavelength-tunable transceiver for 10 Gbps DWDM transmission, the following issues had to be addressed:

Temperature-controlled and external cavity type conventional wavelength tunable lasers consume large amounts of power due to their need for temperature control parts and complex control circuitry, thereby requiring a large area for circuit mounting, and thus were difficult to reduce in size.

2. Aggregation of functions with the optical modulator

Thus far it had been difficult to reduce the size of conventional wavelength tunable lasers, as it was impossible to integrate them with optical modulators required for achieving long-distance transmission, and as such it was necessary to use the lasers by connecting them with external optical modulators.

In order to address the aforementioned issues, Fujitsu Labs developed a modulator integrated laser known as a Tunable Distributed Amplification-Distributed FeedBack (TDA-DFB) laser (Figure 1), which integrates the optical modulator with the laser source.

As a world's first, Fujitsu Labs evaluated characteristics of the newly developed modulator integrated laser in the form of a XFP-type optical transceiver (Figure 2). Evaluation of the transceiver's optical fiber long-distance performance across 80km, which is necessary for DMDM transmission, confirmed basic characteristics including stable wavelength tunability for 4 wavelengths over 100 gigahertz (GHz) intervals as established by the ITU-T regulatory organization, and excellent functionality for 10Gbps transmission. 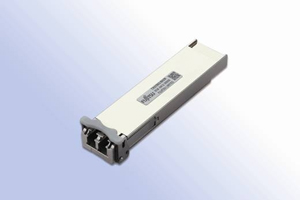 Fujitsu aims to commercialize these technologies in the first half of fiscal 2008 (April - September 2008), and will continue to pursue research and development to further enhance their performance.

Company names reference herein are registered trademarks of their respective owners. Information provided in this press release is current and accurate at time of publication and is subject to change without advance notice.