The Tokyo Institute of Technology and Fujitsu Laboratories Limited today announced their joint development of a new technology that enables the successful propagation of infrared light through an optical crystal film on a silicon substrate, for the first time in the world. The technology is a result of collaborative development by the laboratory of Associate Professor Kazuo Shinozaki of the Tokyo Institute of Technology and Fujitsu Laboratories, and paves the way for compact optical communication devices featuring the integration of silicon large-scale integrated circuits (LSIs) with various optical devices such as modulators and switches.

The new technology was developed to lead the future of ultra-compact optical communications systems, and was enabled by the matching funds from the initiative known as the Effective Promotion of Joint Research with Industries, Academia and Government, from the Special Coordination Funds for Promoting Science and Technology provided by the Ministry of Education, Culture, Sports, Science and Technology of the government of Japan.

In order to enable the use of communications devices such as optical switches and modulators on a silicon substrate, a material with electro-optic effect(1) must be formed on the substrate and light must be propagated through that material. One material known to have excellent electro-optic coefficient is the ferroelectric(2) material, lead zirconate titanate (PZT(3)). However, due to the fact that significant loss of propagation is incurred due to disruption of crystals when single crystal film is formed on top of silicon substrate, it had thus far been difficult to propagate light successfully.

Overview of the New Technology

To overcome the aforementioned technical issue, a buffer layer with a three-layer structure(4)(Ref: Figure 1) was utilized on the surface of a silicon substrate, and a PZT single crystal film was formed over the layer. This enabled minimization of the disruption of the atomic alignment, thereby resulting in a high-quality ferroelectric PZT single-crystal-film with proper atomic alignment, and also prevented reaction between the PZT and silicon. 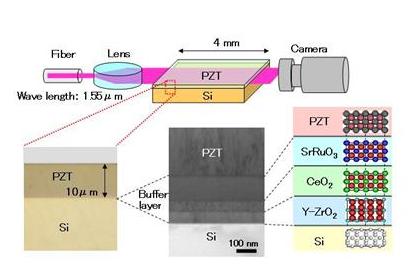 With the same wavelength of infrared light typically used in optical communications (1.55 microns), Tokyo Institute of Technology and Fujitsu Laboratories successfully minimized the PZT propagation loss to less than one decibel per centimeter (1dB/cm) which is approximately one-tenth (1/10) the loss that had been incurred with existing technologies.

The parties also succeeded in demonstrating the world's first successful propagation of infrared light through an optical crystalline film formed on a silicon substrate.

The electro-optic coefficient(5), a figure representing the level of change in the refractive index, was verified as being 76 picometers per volt (76pm/V) with infrared light. This is approximately three times the value of lithium niobate single crystals, which are widely used as optical modulators.

Fujitsu Laboratories and the Tokyo Institute of Technology will utilize this new crystal-forming technology for the development of technologies to form various optical devices on silicon substrates.

Company and other organizational names referenced herein are trademarks or registered trademarks of their respective owners. Information provided in this press release is accurate at time of publication and is subject to change without advance notice.