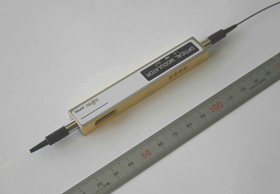 40 Gbps core optical network systems are being increasingly deployed in response to dramatic increases in data transmission traffic brought about by the global expansion of broadband networks. While many optical transmission signal encoding methods are under consideration, DQPSK transmission technology is becoming essential due to its strength against signal distortions resulting from transmission fibers and relay nodes, as well as its superior bandwidth efficiency.

Conventional LN modulators have required 20 Gbps high-speed electric signals of 10 V or higher in order to generate 40 Gbps DQPSK signals, and reducing the size and power consumption of drive circuits while maintaining reliability has been a challenge.

Fujitsu's new LN modulator achieves a drive voltage of 4.0 V, the lowest in the world, making it a practical optical modulator for use in commercial systems.

In order to generate high-quality DQPSK signals, it is necessary to expand the bandwidth of optical frequency response. Using technology similar to that employed in previously commercialized 40 Gbps LN moderators, a 25 GHz bandwidth has been achieved.

Positioning multiple high-speed electrical signal input terminals close together on one side of the modulator enables generation of DQPSK signals without the need to adjust for electrical signal lag on the drive circuit.

Furthermore, employing separate input terminals for the high-speed electrical signals mentioned above and the DC bias signals for controlling the modulator eliminates the need for an external electrical circuit to combine them.

Product samples of the new Fujitsu LN optical modulator will be on exhibit at the Optical Fiber Communication Conference and Exposition (OFC) and the National Fiber Optic Engineers Conference (NFOEC) 2007 in Anaheim, California, from March 27 - 29, 2007.