Fujitsu Limited today announced the development of the MHW2040AC model 2.5'' hard disk drive (HDD) for use in automotive and various equipment that must operate in harsh environments, ranging from cold climate regions to deserts. The new model will be available on global basis at the end of March, 2007. 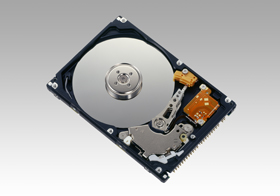 In addition to their conventional use in PCs, 2.5'' HDDs are used for a wide variety of applications, such as automotive and industrial equipment. Maintaining its status as a leader in developing and offering products to meet a wide range of customer needs, Fujitsu is releasing the MHW2040AC, the third generation of its 2.5'' HDD product line, for use in automotive and other applications under extreme environmental conditions.

The new model features a top-class operable temperature range of -30°C (-22°F) to 85°C (185°F). The 40 GB capacity(1) HDD can also withstand operational shock of up to 300 G. It also features best-in-class acoustic noise level of 1.5 bels(2) at idle and low-power consumption, operating at 1.8 watts when reading or writing data. In addition to use in increasingly popular automotive navigation systems, the MHW2040AC is also an ideal option for applications where extreme temperatures have caused difficulty, such as industrial equipment, surveillance cameras, PoS systems and ATMs. It is also RoHS(3) compliant.

Half a million units in the first year of availability