Fujitsu Globally Expands Its Recycling Service for IT products

-In addition to Japan and Europe, nine locations in North America and APAC to begin accepting IT products for recycling-

The Fujitsu Group today announced the expansion of its end-of-life IT products-recycling service. In addition to the voluntary recycling service already underway in Australia, Canada, and the US, the service will be offered at one additional location each in Canada and the US from April 2007. The Fujitsu Group will also expand the service gradually in Southeast Asian countries from May 2007.

These additions in North America and the APAC region build on existing services in Japan and Europe, enabling IT products-recycling at a total of nine locations in six countries. In this way, Fujitsu is working with its environmentally-minded customers to deal appropriately with IT products that have reached the end of their useful life and thereby contribute to environmental sustainability.

As information technology moves rapidly forward, it enables greater efficiency and convenience in our society. However, along with the benefits comes an increasing volume of discarded IT equipment. There are also universal concerns regarding discarded equipment, such as the risk of personal information leaks and the adverse impact on the environment. In Japan, Europe, and elsewhere, laws concerning Extended Producer Responsibility(1) have been enacted, obliging producers to take responsibility for the proper treatment of certain used electrical and electronic devices. 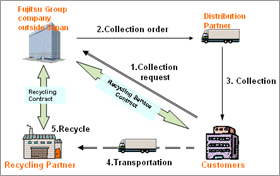 Even in countries where there is no legal requirement, the Fujitsu Group recognizes the importance of recycling, and is working to establish recycling systems as one of its goals for the fourth stage of the Environmental Protection Program of the Fujitsu Group(2). Fujitsu is commencing recycling services in one new location each in Canada and the US in April of this year, and gradually in Singapore, Thailand, and the Philippines from May. The equipment collected through these programs will be disposed of appropriately by local recycling partners in each country.

Fujitsu Australia Ltd.(FAL) has commenced "Reverse Logistics Solution" for used IT products since April, 2006. Over the past twelve months, Fujitsu Australia has recycled approximately 250 tons of waste from a Point-of-Sale refresh program at one of Australia's major retailers.

The Fujitsu Philippines, Inc. Group of Companies (FPIGC) has been doing its share to protect the environment, having recycled some 27 tons of various types of electronic waste from the FPIGC and its customers from July 2006 to February 2007 as a pilot project. On May 2007, FPI will formally launch an electronic waste recycling service called the "Fujitsu Take-Back Service". Customers who avail of this service are assured that their used Fujitsu IT products will be disposed of in an environmentally-friendly way.

In Japan, Fujitsu has been offering recycling service to its corporate customers since 1995, and the service is now also available to household consumers. In 2006, having acquired wide-area system approval(3) from the Ministry of Environment for industrial waste and general waste recycling, Fujitsu began offering recycling service directly to corporate customers that have multiple locations throughout the country. Previously, customers having multiple locations needed separate contracts with logistics and waste treatment companies in the respective prefectures. With the approval, however, companies using Fujitsu products can cover their recycling needs across Japan with a single contract with us. In January 2007, Fujitsu set up a call center for recycling that customers can deal with directly, rather than going through a sales outlet. 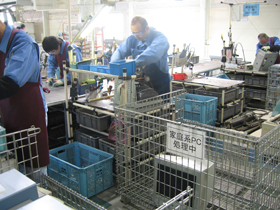 As part of the fourth stage of the Environmental Protection Program of the Fujitsu Group, the company aimed to reach reuse and recycling rate of collected end-of-life products from corporate customers of 90% by the end of the fiscal year 2006, this goal was achieved one year earlier than planned by reaching 90.3% in fiscal year 2005. The forecasted figure for the current fiscal year is 90.6%.

Furthermore, in European countries, the Fujitsu group has established recycling system based on national laws transposed from the WEEE directive(4). By commencing recycling service in North America and the APAC regions, Fujitsu expands recycling service to a global scale. Recycling of IT products as one step, the Fujitsu group will actively continue to contribute to the reduction of burden on the environment and establishment of a sustainable society.

Fujitsu is a leading provider of customer-focused IT and communications solutions for the global marketplace. Pace-setting device technologies, highly reliable computing and communications products, and a worldwide corps of systems and services experts uniquely position Fujitsu to deliver comprehensive solutions that open up infinite possibilities for its customers' success. Headquartered in Tokyo, Fujitsu Limited (TSE:6702) reported consolidated revenues of about 4.8 trillion yen (US$40.6 billion) for the fiscal year ended March 31, 2006. For more information, please see: http://www.fujitsu.com

All product names and company names mentioned herein are the trademarks or registered trademarks of their respective firms. Information provided in this press release is accurate at time of publication but is subject to change without advance notice.