Fujitsu Limited today announced the development of the new MHW2 BJ series of world's first(1) 7,200 rpm 2.5" hard disk drives (HDDs) with a serial ATA 3.0 Gb/s interface(2). Featuring the world's highest storage capacity of 160 GB(3) for a 7,200 rpm 2.5" HDD, the new series is targeted primarily at high-performance notebook PCs. The new series will be available on global basis at the end of May, 2007. 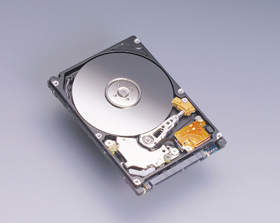 In addition to achieving the world's leading storage capacity, MHW2160BJ is capable of data transmission speeds at up to 300 MB/s, the fastest rate in the industry. The series also features best-in-class acoustic noise level of 2.5 bels(4) at idle, and low-power consumption, operating at 2.3 watts or less when reading or writing data.

As the use of notebook PCs becomes even more popular, there is demand for high reliability notebook PC HDDs that offer high-speed and high-capacity performance on par with those used in desktops. The MHW2 BJ series meets this demand with a speed of 7,200 rpm, the highest of any serial ATA 2.5" HDD. These HDDs boast the high quality Fujitsu customers come to expect, and they can be easily incorporated into high-performance notebook PCs and flat panel desktop PCs, both of which are expected to gain popularity. They are also RoHS(5) compliant.

Fujitsu is a leading provider of customer-focused IT and communications solutions for the global marketplace. Pace-setting device technologies, highly reliable computing and communications products, and a worldwide corps of systems and services experts uniquely position Fujitsu to deliver comprehensive solutions that open up infinite possibilities for its customers' success. Headquartered in Tokyo, Fujitsu Limited (TSE:6702) reported consolidated revenues of about 4.8 trillion yen (US$40.6 billion) for the fiscal year ended March 31, 2006. For more information, please see:http://www.fujitsu.com